English Cast Brass Head of The Maiden of the Mercers Company

Caption Literature
An Interesting and Rare English Cast Brass Head of The Maiden of the Mercers Company
Traces of red polychrome remain to the edges
Early 16th Century
Size: 19cm high, 18cm wide, 4.5cm deep – 7½ ins high, 7 ins wide, 1¾ ins deep
By 1300 the Livery companies of London were already using cognizance’s, worn on their sleeves to identify themselves. In 1312 when London celebrated the birth of the future Edward III a clerk of the Guildhall recorded on the final day of the celebrations that the Mayor and Aldermen 'in robes of one suit' rode in procession to Westminster with the 'Drapers, Mercers and Vintners' all 'richly dressed' wearing liveries and cognizance’s.
Mercers dealt in silk, linen, fustian (a mixture of flax and cotton), worsted and all sorts of dress accessories now known as haberdashery. 'Silkwomen' were highly respected skilled craftswomen who were often the wives of mercers. They produced fine silk braids, cords, laces, tassles and other ornaments, which they usually sold to other women. The image of a virtuous maiden may have been adopted as a suitable cognizance of the mercer as his trade went hand in hand with that of the silkwoman.
A maid's head was one of the most frequent shop signs hanging in the Mercery, a large area on the south side of Cheapside. A tavern in Cheapside was recorded in 1407 as being called the Maiden's Head, and many of the churches in the same area were dedicated to the Virgin Mary.
However the Mercers did not use the Virgin Mary for their cognizance as although Pre-Reformation they could have done so, Post Reformation it would not have been permitted, and they would have had to eradicate her image as did the Merchant Taylor’s in 1586. The mercers never removed their maiden because she did not represent the Virgin.
The maiden's head as represented in this brass is similarly shown in a carving of the late 1470's in St George's Chapel, Windsor. In 1446-47 the Mercers 'paid to a glazier for making glass with the maid's head, 12d', to decorate their chapel in St Thomas of Acre. In 1510 they purchased a plot from the Hospital of St Thomas of Acre and began to build a magnificent hall. This building was directly hit and destroyed by an incendiary bomb in 1941.
A hallmarked 1513 silver cup known as the 'Leigh Cup' which was used for election feasts is one of the few surviving objects made for the Mercers Hall. Decorated with many maidens, it was given upon his death in 1569 by Sir Thomas Leigh, a past Lord Mayor of London and Master of the Company, who recorded in his will 'I give and bequeath to my loving brethren, the company of Mercers, one fair cup and standing cup all gilt, garnished with maiden heads, roses and flagons..... and a maiden in the knop, with a unicorn fawning in her lap.....'
From all of these representations it is clear that in the 16th century the Mercer's maiden covered her long flowing hair with a demure bonnet and a head covering, wore a bodice and had no crown. Later in the 17th century she is portrayed as rather disheveled, her long hair flying free, and wearing a large crown.

English Cast Brass Head of The Maiden of the Mercers Company 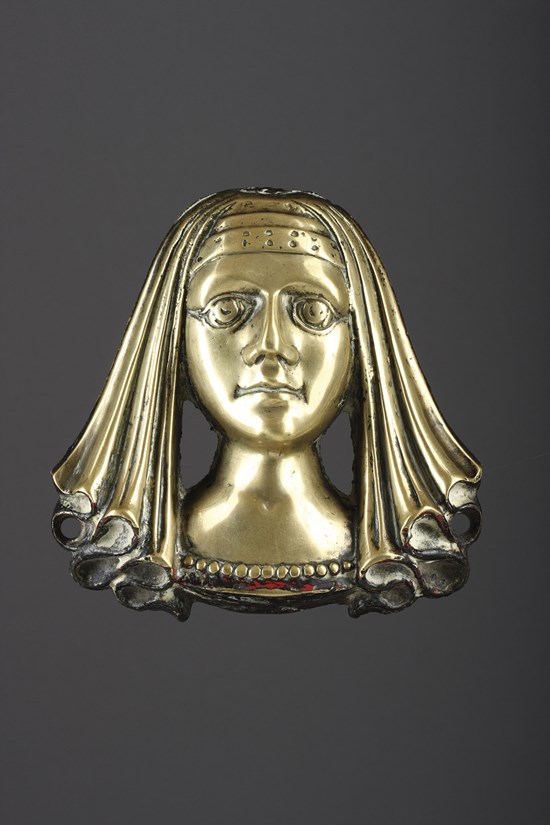