Caption Literature
An Interesting Prehistoric Thick Walled Hominoid Skull of an Early Neanderthal Probably from Africa
Middle to Upper Pleistocene
100,000 years old
Size: 13.5cm high, 20cm deep, 14cm wide – 5¼ ins high, 8 ins deep, 5½ ins wide
Man, scientifically known as 'homo sapiens' is the most highly developed of all living creatures. The oldest forms of homo sapiens are directly connected with homo erectus and they have come from all parts of the world and various geological horizons. However, they do differ considerably from a morphological point of view and this has led to great controversies in which scientists differ as to where a species belongs and at what level it appears in the family tree of man.
This skull bears similarities to one found in North Africa of an early Neanderthal with a jutting prominent ridge on the top jaw and an elongated thick walled skull. These skulls are often found broken at the base to extract the brain in order to eat it. It is certain that Neanderthal man was a cannibal and evidence has been found in the remains of settlements that show these skulls were often used as trophies. 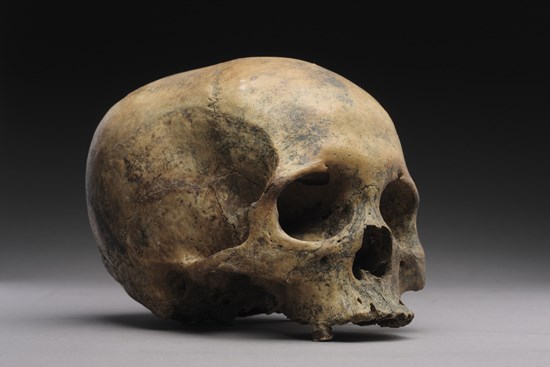