Caption Literature
A Rare Japanese 'Sawasa' Oval Hinged Tobacco Box
Decorated on a gold ground in black lacquered chiseled appliqué with an oriental landscape consisting of pagodas and branches of cherry and plum blossom. The sides with continuous decoration and the interior gilded
Late 17th - Early 18th Century
Size: 3cm high, 10.5cm wide, 8cm deep – 1 ins high, 4 ins wide, 3 ins deep
Sawasa objects were made for the European market and consist of an alloy of copper with gold, silver and arsenic decorated with black lacquer and gold. They were the product of cultural interactions between Asia and Europe which resulted as a consequence of European expansion into Asia and global trade in the 17th Century, and a growing mutual interest in the peculiarities of each others culture. From circa 1700 Sawasa wares were to be found in European Royal armouries and collections of curiosities and were sometimes described as 'Tonkinese chiseled work' or 'Cochin China work'.
Commissioned by the Dutch East India Company these tobacco boxes imitated a European shape, but were decorated in oriental style, and as the Japanese, who were accustomed to catering for Asian markets, regularly copied the Chinese and their products, it is now difficult to determine whether a tobacco box was made by a Chinese or Japanese craftsman.
The V.O.C. Director of Bengal, Jan Albert Sichterman (1692-1764) owned a large collection of Sawasa and the auction catalogue of his estate listed 29 Sawasa objects 'beautifully and artfully worked black with gold and with raised chiseled relief of Japanese composition'. Sawasa boxes described as 'Tonkinese wares' are also found in the famous Dutch Royal Cabinet of Curiosities. 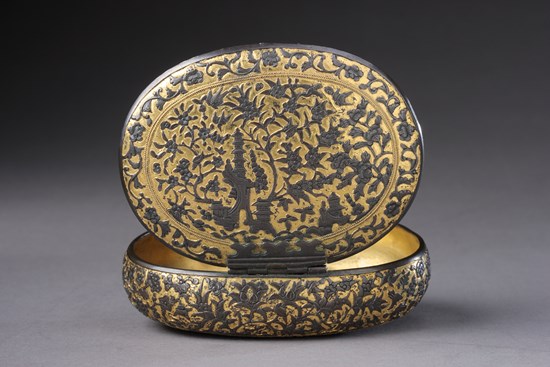 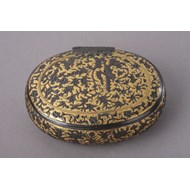