Caption Literature
A Fine German Stobwasser Lacquered Papier Maché Snuff Box
Painted with a scene of the Emperor Napoleon I reviewing two of the veterans of the Battle of Austerlitz
The lid inscribed 'Sire! C'est í  Austerlicke que j'ai été démali' and with the number 57
The base marked 57 and 'Stobwasser's Fabrik Braunschweig'
Circa 1810-15
Size: 1.7cm high, 10cm dia. - ½ ins high, 4 ins dia.
The battle of Austerlitz, also known as the 'Battle of the Three Emperors' was one of Napoleon's greatest victories and regarded as a tactical masterpiece. On the 2nd December 1805 Napoleon effectively destroyed the 3rd Coalition against the French Empire. After nine hours of difficult fighting he was victorious over the combined forces of the Austrian army of the Holy Roman Emperor Francis II and the Russian army of Tsar Alexander I. At the subsequent Treaty of Pressburg, Napoleon was recognised as the King of Italy by Austria's now officially titled Francis I, France gained most of Austria's alpine lands and French hegemony was established in Western Germany. 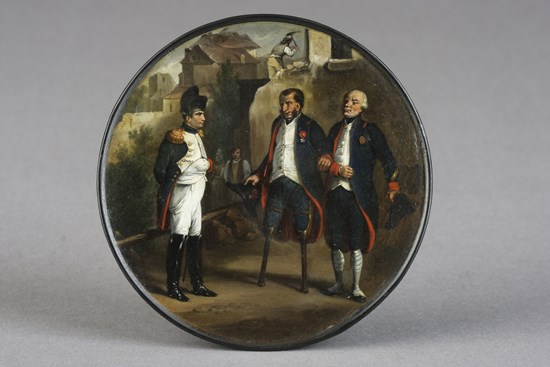 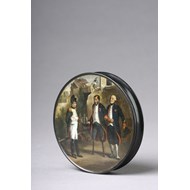 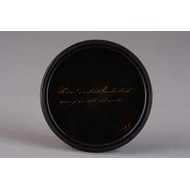