Caption Literature
An Unusual African Kongo Peoples Cylindrical Ivory Carving of a Veiled Figure of the
Virgin Mary with four attendants
Mid 19th Century
Size: 9cm high, 5.5cm wide, 5cm deep – 3½ ins high, 2¼ ins wide, 5cm deep
In the tradition of Afro-Portuguese ivories of the 16th and 17th centuries this ivory portrays a fusion of African and European elements. After the conversion to Christianity of King Alfonso I of the Kongo in 1512 images of the crucifix, the Virgin Mary and St Anthony were created in bronze and ivory by Kongolese artists after Portuguese originals. Thus the process of conversion was visually reinforced by the widespread use of these religious images. In time the Kongo peoples returned to their original religion and the images lost their Christian meaning. The most dramatic symbols of the crucifix, Christ and the Virgin Mary, originally made so popular by the teachings of the Capuchin priests, became integrated into African tradition as emblems of power or as instruments of Kongo religious ritual and remained in use into the 20th century.
This ivory carving is an example of how Christian symbols have become intermingled with African ones. In the Kongo the gesture of the right hand to the shoulder is a sign of respect or deference to a superior. The four figures most probably represent attendant Saints protecting with a veil the figure of the Virgin Mary, symbolic of her role as mediator between Man and the Divine. The presence of these motifs suggests that this ivory had a liturgical use or was made for use in a shrine context. 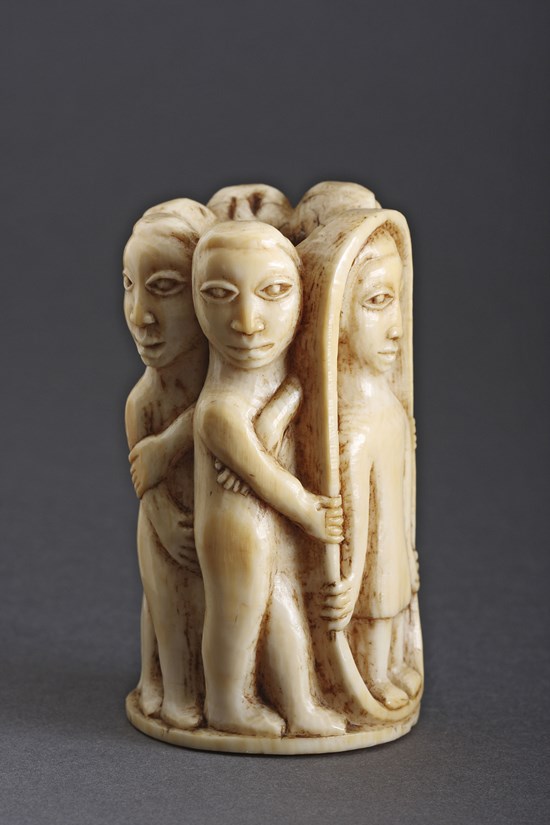 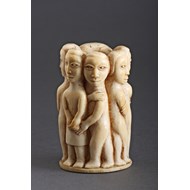 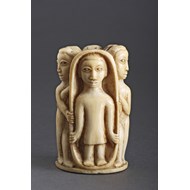 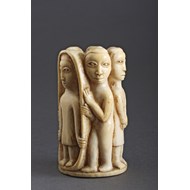