Caption Literature
A Fine English Neo-Classical Turned Blue John Vase
Raised on a stepped marble pedestal base with blue john panels and ormolu beading
Circa 1780 – 1800
Size: 36cm high, 14¼ ins high
Blue john is a semi precious mineral mined in caves in Derbyshire and was known in the 18th Century as ‘Derbyshire Spar’. First discovered by the Romans 2000 years ago, large specimens were exported back to Italy as two vases of blue john discovered in the excavated ruins of Pompeii demonstrate. Although beloved and prized by the ancient Romans for its deep purple veining and its translucency the blue john mines remained abandoned and forgotten after their retreat from Britain.
The mines were rediscovered and reopened in the late 18th Century and a small local industry grew up centered on turning objects made of blue john. In the 1770’s Matthew Boulton saw its potential and began mounting classical urns, perfume burners and candelabra made of the mineral in his rich ormolu. During the neo-classical revival many objects such as obelisks, specimen tables, inlaid fireplaces, vases and goblets were all made from blue john and were in great demand for display in the grand houses of the English aristocracy. 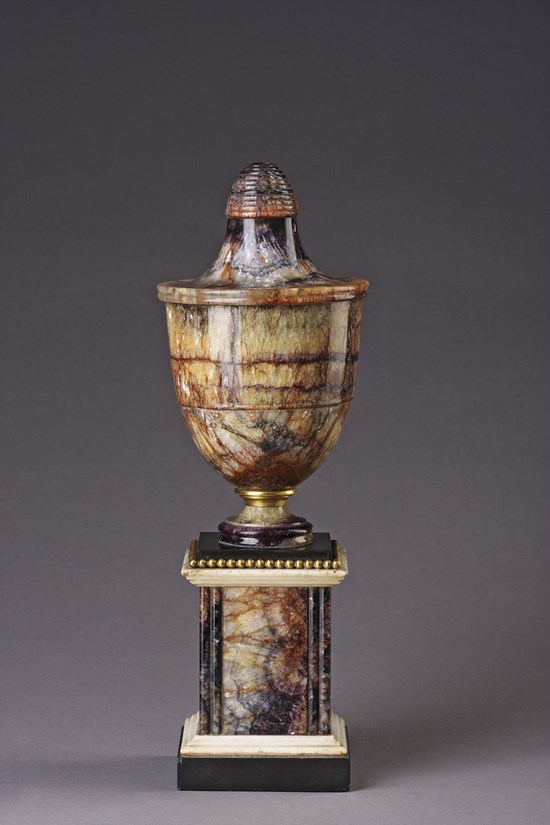