Very Large Linen Flag with the Crest of a Running Greyhound

Caption Literature
A Very Large Linen Flag with the Crest of a Running Greyhound
With the Latin motto beneath: ‘Celer – Atque – Fidelis’ meaning ‘Swift and Faithful’
19th Century
Size: 234cm high, 305cm wide – 92 ins high, 120 ins wide (approx)
A Flag has been used as an emblem or symbol for nationalistic, religious, or military displays, or as a means of signalling since ancient times. This flag was most probably used as the crest and motto of a professional greyhound trainer, perhaps in Ireland as the running greyhound was recorded in use as a crest by the Irish families of Drury, Cave, Lefanu and Keefe around 1815.

Very Large Linen Flag with the Crest of a Running Greyhound 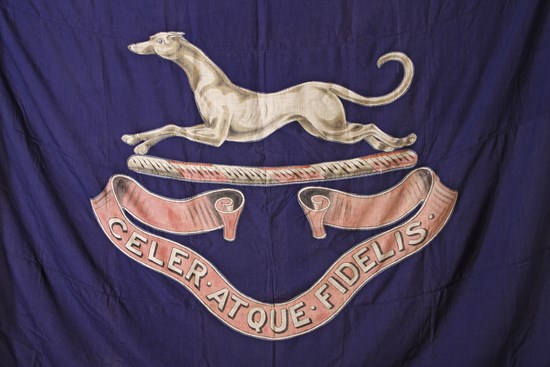