Caption Literature
A Neo Classical Oval Oil on Marble Panel
Finely painted with a mythological scene of Mars and Venus, after those found at Pompeii and in the spirit of the ‘Fourth Style’. The astrological sign of a scorpion below and images of a chrysalis and butterfly in the upper background. The whole supported by two satyrs and surrounded with floral wreaths and ribbons
Circa 1780 – 1820
Size: 53.5cm high, 64cm wide, 3.5cm deep – 21 ins high, 25¼ ins wide, 1½ ins deep
The loves of Mars and Venus were often portrayed in Pompeii frescoes for the name of the city was linked with the goddess. The mythological scenes are found in the most luxurious residences in different rooms and alcoves where guests were entertained, where clients were received and people would stroll around the internal gardens. The models used for the composition were often famous paintings from the Hellenistic era and in the features of the lovers we can glimpse the features of the Pompeian. Copies of paintings by the famous Hellenistic artists were considered a ‘must’ to be exhibited proudly and this panel continued in this tradition.
The late 18th century – early 19th century fashion for Pompeian art first appeared in a Europe weary of the Rococo. The ‘buried city of Pompeii’ held a fascination for the grand tourist and its most visible legacy was to be found in its paintings. These have enjoyed a particularly long life in that they remain a genre of decoration, which has passed into the vernacular of the designed modern interior. Thus, Pompeii continues to exert its fascination and lives on in the consciousness of the western world. 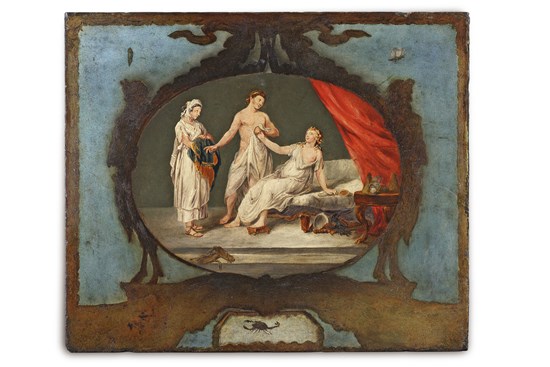 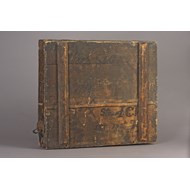