Caption Literature
A Fine and Rare French Late Renaissance Carved Walnut Court Jesters Double Headed
‘Marotte’ or club
One side depicting the capped head of a clever and devilish jester, the other the head of an innocent boy fool
Fine old brown smooth patina – some old damage to one side of the boy’s head now with aged patina from wear and use
Circa 1620 – 40
Size: 84cm long – 33 ins long
Fools and jesters appear throughout European history. Both the Celts and the Normans had domestic fools who carried real weapons and were expected to use them in defence of their lords. Fool societies or Sociétés Joyeuses had existed in France, Germany and the Low Countries since the 14th century with fools dressed in eared hoods with bells, baubles (inflated bags on sticks) and marottes (sticks or clubs decorated with the head of a jester or fool). This tradition originated in the Feast of Fools whose legacy in England has survived as the ‘Lord of Misrule’ at Christmas who is an occasional and amateur fool.
An early 17th century oil painting entitled ‘wee three loggerheads’ hanging in the Shakespeare Birthplace Trust of Stratford upon Avon, depicts two fools, one of whom holds a very similar wooden marotte. It is thought that the painting represents Tom Derry, fool to Anne of Denmark, and Muckle John, fool to Charles I.
There has always existed confusion between clever and innocent fools on the one hand and between ‘idiots’ and wise naturals on the other. In many illuminated manuscripts the fool is frequently shown as an innocent boy, questioning doctrine or as a clever jester of the devil.
An Italian renaissance fool is depicted (Bodleian Library. Oxford ms douce 272 f43) holding a large club wearing a belled hood and contemplating two dogs. Another French Psalter of the early 14th century (Bodleian Library. Oxford ms douce 211f 258v) depicts a frantic fool with his marotte.
The jester/fool is a representative figure of humanity fought over alternately by good and evil characters as can be seen in this rare janus headed marotte. 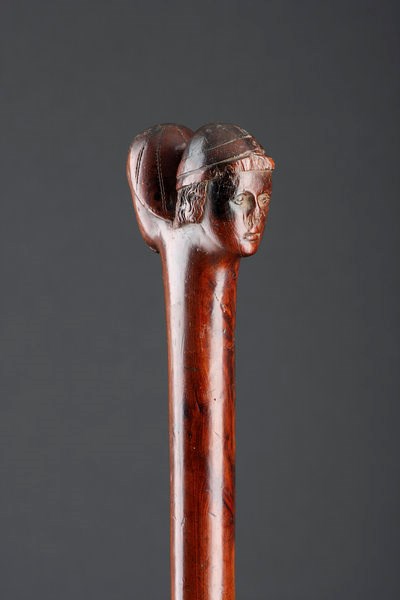 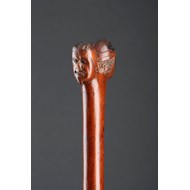 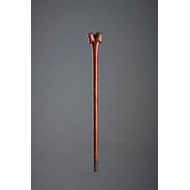