Caption Literature
An Unusual Tradesman’s Sign in the form of a mortar and pestle
Once used above an apothecary’s shop
Carved oak, the top lined with lead, traces of old gilding
Early – Mid 19th Century
Size: 62cm high, 41cm dia. – 24½ ins high, 16 ins dia.
Trade signs were once used to distinguish between a tradesman who had mastered a craft and a shop-keeper who was a merchant and supplier of goods. Later they were used to advertise the nature of the business carried out on the premises and for identification purposes to the illiterate. Signs would often become part of the address such as ‘at the Two Blue Flower Pots, Dean Street, Soho, London’. Signs were common in England in the 17th and 18th centuries, but very few have survived. In London most signs were made by specialist’s craftsmen in Harp Alley, Shoe Lane â€¦. ‘where until lately gilt grapes, sugar loaves, lasts, teapots etc. were exposed ready for market’. (Larwood and Hotten; The History of Signboards 1866).
It is interesting to note that the same artists also made ‘Constables Staffes’, early police truncheons, which have survived in considerable numbers and are eagerly collected today. 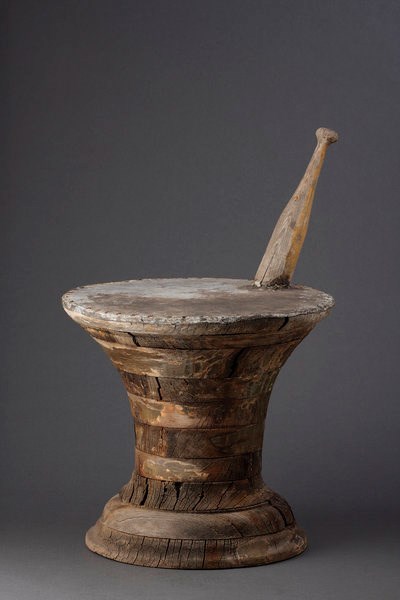