Caption Literature
A Fine Pacific Marquesas Islands Carved Ironwood Bifacial War Club ‘â€²Uâ€²U’
Late 18th Century – Early 19th Century
Size: 139cm long – 54¾ ins long
The extraordinary form of the â€²Uâ€²U is unique to the Marquesas Islands and is of pre-contact origin. No two clubs are ever carved alike as the motifs were regarded as the personal property of each individual owner and could be used by them for tattooing and the ornamentation of personal objects. It has been said that these designs either as tattoos or on objects represent the Gods ‘Atua’ as protective and watchful guardians.
The area of carving is to both sides of the top of the club on which appears three tikki heads adorning a stylized human face. To the very top carved in low relief is another face. Below towards the shaft are carved linear geometric bands in which abstract faces reside and it is in these bands that are seen the greatest design differences from club to club.
The club is made from a heavy ironwood called ‘toa’ which is also the Marquesan name for warrior. It attains its dark colour from immersion in taro swamp mud and then by polishing with coconut oil. Used by chiefs and warriors for both fighting and prestige display they became valued heirlooms. Some two hundred clubs survive in museums and private collections from the relatively large numbers brought back in the early 19th century. Still eagerly collected, these clubs have come to symbolise the ‘high art’ of the Pacific. 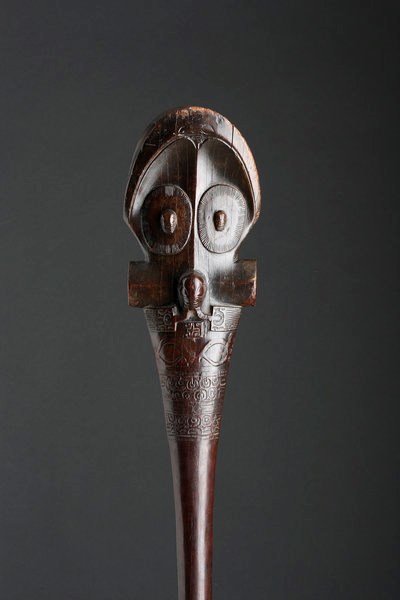 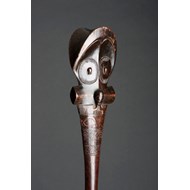 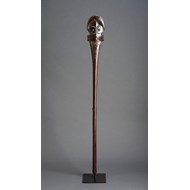