A Fine Marble Bust of the Young Anthony Ashley Cooper, the 7th Earl of Shaftesbury

Caption Literature
A Fine Marble Bust of the Young Anthony Ashley Cooper, the 7th Earl of Shaftesbury
(1801 - 1885).
Signed ‘Thos Campbell fecit 1824’
Size: 69cm high – 27¼ ins high
Thomas Campbell (1790 - 1858) was an English sculptor who from 1818 maintained a studio in Rome sculpting in marble the likenesses of many of the more illustrious Grand Tour visitors. In 1830 he returned to London and regularly exhibited at the Royal Academy until 1857. Many if his sculptures are now in museums. His bust of the actress Sarah Siddons can be seen in the National Portrait Gallery in London.
There are three outstanding members of the Ashley Cooper family each of whom achieved distinction in a different field, Anthony 1st Earl of Shaftesbury (died 1683) is the man to whom the British owe the Habeas Corpus Act, he was also a member of the Cabal Ministry and Lord Chancellor in the reign of Charles II. The 3rd Earl (died 1713) grandson of the 1st Earl was author of numerous philosophical works. The 7th Earl (died 1885), the subject of this fine bust, was a famous philanthropist and social reformer. The fountain surmounted by the winged figure of Eros which stands in the middle of Piccadilly Circus and is known to millions, was erected in his memory.
A great reformer he led the movement for improving conditions in the cotton mills, factories and collieries of 19th century industrial Britain. In the 1840’s he argued for legislation to protect apprentice chimney sweeps or ‘climbing boys’ who were often suffocated or burnt whilst cleaning the soot from chimneys. In 1847 he was responsible for introducing the 10 hour working day. To the end of his life the 7th Earl worked for a great variety of causes, including housing and education, highlighting the suffering and poverty of the underprivileged, and through his tireless efforts helped to implement the concept of social welfare.

A Fine Marble Bust of the Young Anthony Ashley Cooper, the 7th Earl of Shaftesbury 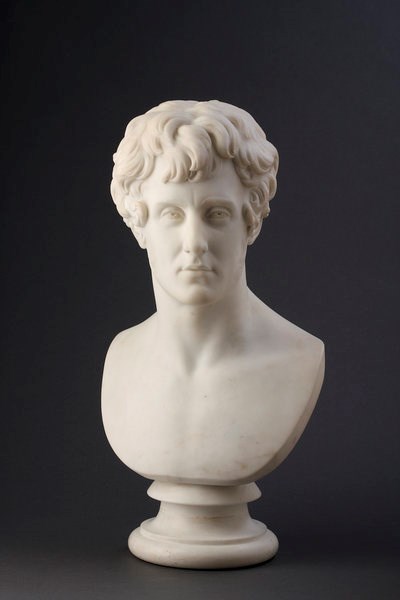