Caption Literature
A Spanish Renaissance Marble Column Carved from Violet Brocatelle
Inscribed I H S and S M R
Early 17th Century
Size: 60cm high, approx: 17cm dia. – 24 ins high, approx: 6¾ ins dia
Violet Brocatelle or Brocatelle of Spain comes from a quarry in Tortosa in Spain that was opened in Antiquity. The marble consists of varying shades of violet, yellow and pink and was used in the 17th and 18th centuries on pieces of fine furniture and to construct fireplaces, an example of which can be seen in the antechamber of the Dauphin at the Chateau of Versailles.
IHS is used by the Catholic church as the symbolic monogram of Christ. ‘Iesous Hommum Salvator’ meaning ‘Jesus Saviour of Man’. The monogram appears to have originated in Rome with the early Christians where it can still be seen incised on the wall of the Roman Catacombs. However, the Roman Emperor Constantine is recorded as having a vison in which he heard a voice proclaim ‘in this symbol, thou shalt conquer’ so IHS has also stood for ‘In Hoc Signo’. The symbol was popularised in the 15th century by Bernardine of Sienna who promoted it as a symbol of peace. Today the emblem is used to represent the communion wafer and is closely associated with the Jesuits.
SMR is the symbol of the Blessed Virgin Mary, Mother of God. At the council of Ephesus in 431 A.D she became known as ‘mediator of all graces’ and as ‘co-redemptress’. Of Alexandrian origin the title ‘Theorokos’ or Mother of God became recognised as orthodox within the Catholic church because of the hypostatic union of divinity and humanity in the single person of Christ.
This fine marble column may have once borne a sculpture of the Christ child and the Virgin Mary. There are some examples of European renaissance church sculptures that are known as the ‘Madonna’ or ‘Virgin of the Pillar’. 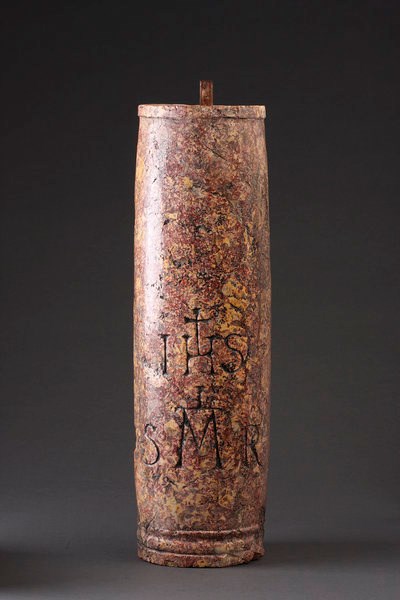