Caption Literature
An Indian Moghul Gold Mounted Amuletic Boars Tusk Bangle
Early 19th Century
Size: 9.5cm dia. – 3¾ ins dia.
In India the custom of wearing jewellery has an unbroken history reaching back 5000 years and even today the use of jewellery in India continues with undiminished vitality. India is now the worlds largest repository of gold and silver most of which has been invested in jewellery to act as family insurance against the consequences of common disasters.
Married women wear wrist ornaments of various kinds especially bangles that have amuletic properties,. Every religious community in India uses amuletic jewellery and a great variety of materials are used, the oldest being those natural substances found in the environment. The use of bells and balls in many forms of jewellery is typically Indian and it is claimed the origin of their use is the practice of Purdah, a custom among Muslim’s and Hindu’s in which married women are secluded from public sight and especially from men not related by blood or marriage. The jingling warns the men of a woman’s approach or presence. 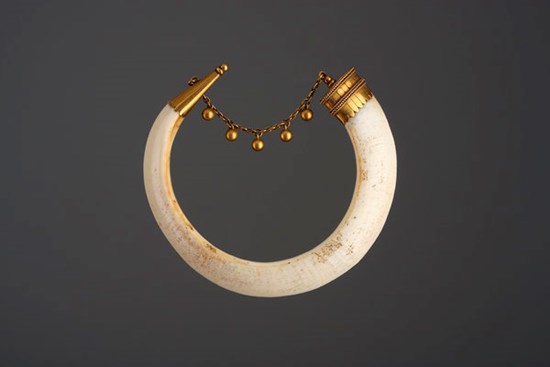