Caption Literature
A Fine Japanese Carved Ivory Netsuke of a ‘Fukura Suzume’ or stylised sparrow
The eyes inlaid with black horn
Signed, fine patina
Edo period (1600 – 1868)
Size: 4cm dia. – 1½ ins dia.
By itself the netsuke had no function, but used together with a pouch, or ‘sagemono’ it became a toggle, supporting with a cord through two holes, the pouch between the hip and the sash and effectively enabling the wearer of traditional Japanese costume to have a pocket in which to keep personal belongings.
However, the netsuke also developed ornamentally as well as functionally and grew into a Japanese art form. Made of many different materials, subject and design were considered the essence of netsuke rather than mechanical technique and in their superb design can be found great art in miniature. 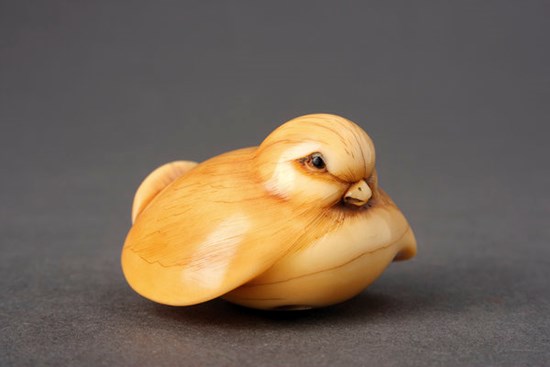