Caption Literature
A Collection of Ancient Roman Bronze Artefacts
Including a hand forged nail, two keys with ring clasps and rectangular axis, a bronze armour pin, the figure of a solid cast bronze cockerel, two lifters for hot coals and a bronze toiletry instrument used for mixing and applying cosmetics
1st – 2nd Century AD
Sizes: 11cm long – 4¼ ins long (max.) 3cm long – 1¼ ins long (min.)
Each everyday object from this fascinating group give an insight into life in the ancient Roman world. For instance; doors opening outward, particularly those of cupboards were not bolted, but closed with lock and key. There were no separate doors to single rooms which were closed only by curtains so as not to shut out the fresh air from the generally small bedrooms and sitting rooms. Poles and rings for these curtains have been found at Pompeii. 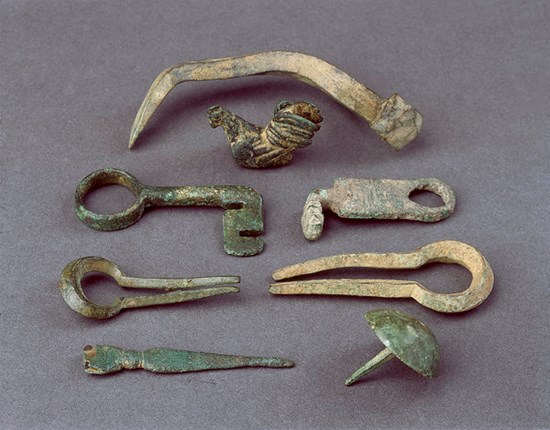