Caption Literature
An Interesting Naí¯ve Oil on Canvas of the Royal Naval Submarine E9
Signed A Moore and dated September 30 1914
Entitled ‘The First British Submarine to Sink a German Warship by Torpedo the E9’
Size: 41cm high, 51 cm wide – 16 ins high, 20 ins wide
When the British Naval Submarine Service was formed in the early 20th century submarines were not at all popular. The First Sea Lord Admiral Sir Arthur K Wilson VC vehemently opposed their introduction to the Royal Navy stating that submarines were ‘underhand, underwater and damned un-English’ and were ‘no occupation for a gentleman’. He also said that in time of war any submariner captured should be ‘hanged as a pirate’.
The E9 was the first submarine to ever successfully torpedo and sink an enemy ship and she was also the first to fly the ‘Jolly Roger’ as a battle honours flag. Lieutenant Commander Max Horton, Captain of the E9 after sinking the German light cruiser ‘Hela’ returned to harbour and going in flew from his raised periscope the black flag with the skull and crossbones on it, and thus the ‘Jolly Roger’ became the emblem of all successful war time submariners putting Admiral Wilson to shame.
The E9 depicted in the oil painting was operating in the cold Baltic Seas in 1914 testing that her apparatus was workable in sub-zero temperatures when the log book suddenly reads ‘as circumstances were favourable decided to attempt to bag a destroyer’. The E9 works her way to within 600 yards of her quarry, fires and waits just long enough to be sure that her torpedo is running straight and that the destroyer is holding her course. Then she ‘dips to avoid detection’. Her log reads with deadly simplicity: ‘At the correct moment after firing, 45 to 50 seconds heard the unmistakable noise of torpedo detonating’. Four minutes later she rose and ‘found destroyer had disappeared’.
Rudyard Kipling in his ‘Tales of the Trade’ describes the E9 and tells of the courage, endurance and pride of the men involved in operating the World War I submarines, often like the E9, in freezing artic waters.
The companion piece to this picture is in the collection of the Royal Naval Submarine Museum at Gosport, Hampshire, England. It is also signed A Moore and has the same date, it shows the E9 viewing the listing and sinking German Ship ‘Hela’ and is entitled ‘Well Done E9’. 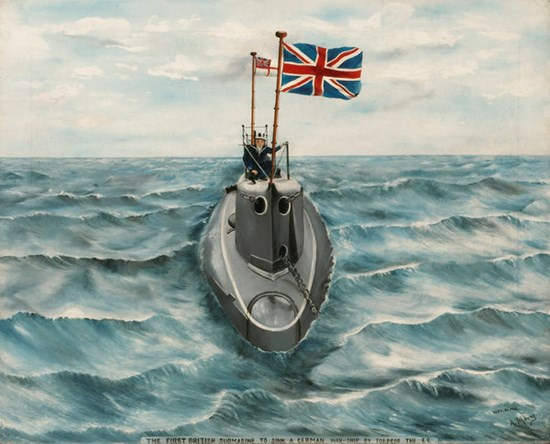