Caption Literature
A Curious Collection of Pre-Historic Animal Teeth
Some contained in the jaw bones of the various mammals; including a Mammoth tooth, Bison, Horse, Lion and Cave Bear teeth and bones.
All contained in an old pine box
One with an old label reading: ‘Left Upper Jaw, Raven’s Cliff, 59 Felis Spelaea. Lion’
Late Pleistocene, 500 – 300’000 years old
Size: case: 21.5cm high, 36cm wide, 24cm deep – 8½ ins high, 14 ins wide, 9½ ins deep
Many European caves have been found to contain extraordinary quantities of cave bear remains and in the same geological deposits prehistoric Lower Palaeolithic stone tools often occur. It is this fact, that stone tools are found with extinct animals, which first demonstrated the great antiquity of mankind.
During the late Pleistocene period the mammals were the most successful class of animals on earth and different species evolved to take advantage of the multitude of habitats. Hippopotamuses lived along the Thames and lions and hyenas roamed further north. Some such as the woolly rhinoceros, woolly mammoth and cave bear became adapted to living on or near the ice. All of these animals have been extinct for thousands of years, but some like the horse, which is extinct in the wild, survive in domestication. 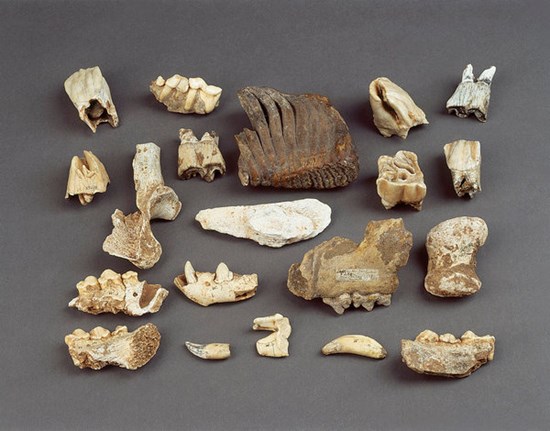