Caption Literature
A Fine Pair of Carved Wood Figures Attributed to Thomas Ona Odulate of Ijebu Ode
Yoruba, Nigeria, West Africa
Depicting a British Colnial Officer ‘Capt Kennelly’ and his wife ‘Mill’
First half of the 20th Century
Size: 28cm high – 11 ins high and 24.5cm high – 9¾ ins high
Thomas Ona was a renowned Yoruba artist who carved colonial and commemorative figures for the early tourist trade in Nigeria. Working from the turn of the century into the fifties, he produced light wood figures with a traditionally made Yoruba adze and knife and decorated the carvings in polychrome colours. A photograph of 1938 shows him at work on a similar figure all of which he considered to be traditionally naturalistic in style, thereby refuting the idea that he deliberately caricatured the European colonials.
Most of his carvings depict the ruling British elite in their formal dress, often wearing large brimmed sola topi which he would carefully carve as a removable item. Besides his clever portrayal of colonial dignitaries, lawyers, polo players, policemen, army sergeants etc., he also produced commissioned carvings which would be named such as these, Capt Kennelly’ and ‘Mill’ presumably a Captain of the Royal Navy and his wife. 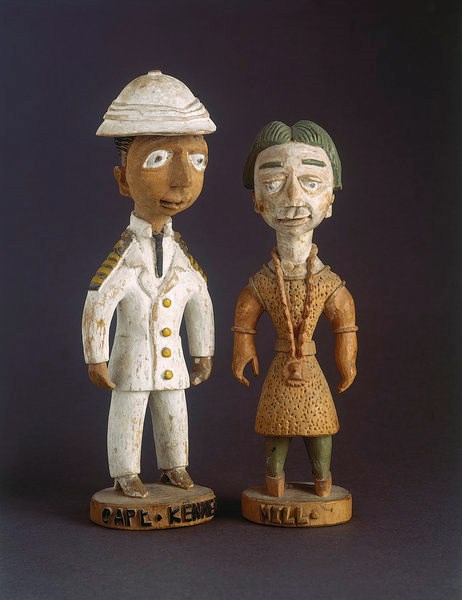