Caption Literature
An African Ivory Coast Dan or ‘We’ Carved Wood Low Chair
Old worn smooth patina
Late 19th – Early 20th Century
Size: 32cm high – 12½ ins high
The form of the European chair seems to have had a particular impact on West African tribal culture judging from the number of variations that exist and the curved back rail of this example was most probably inspired by a European prototype. In Africa, stools and chairs are often signifiers of status being treasured by their owner and recognised by others not only as private and personal, but as a prestige object and indication of the status of the owner.
Whilst President of the College of West Africa in Monrovia, Liberia, from 1936 to 1938, Dr J.H. Furbay collected a chair, that is now in the American Museum of Natural History, New York, which has great similarities to the present example; (Sieber pg. 161). He reported that the chair was always carried by an attendant who accompanied the Chief to whom it belonged, for it was believed that a Chief without his chair was without his dignity. 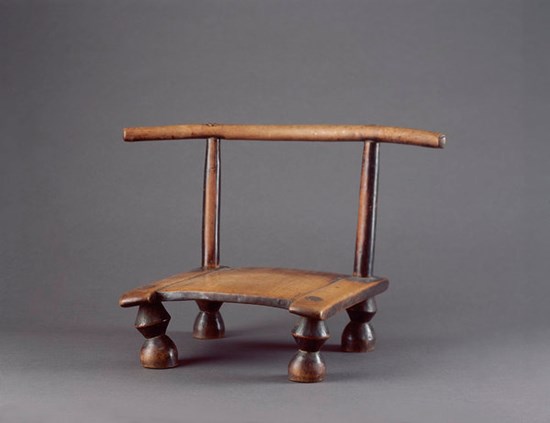