In Item No35 of the Finch & Co Catalogue for 2002, a 17th century
oil painting, there is depicted several period surgical instruments one
of which is a trephine and an elevator. These instruments were of
obvious importance and a symbol of status for surgeons to acquire.
It is incredible now to think that the operation involved sawing into
the skull to relieve pressure or to restore broken fragments from
fractures with the help of en elevator all without anaesthetic must
have been withstood and undergone willingly by the patient.
Trephines as instruments are first mentioned in this country in 1600,
but the history of the operation itself goes back to prehistory.
Archaeologists have found prehistoric skulls in Europe with
perforations that have the rims of the hole blunted suggesting that the
patient survived as a healing process had taken place. These early
trephining operations were probably carried out to relieve headaches or
epilepsy and were carefully performed by Shaman or Sorcerers; their
only instruments being the sharpened edges of stones or flints.
Laundy is the maker's name on this set of polished steel trepanning
instruments. They were well known makers at 12 St Thomas's Street,
Borough, London. This set is rare because it has survived complete in
every instrument and detail, together with its original mahogany
carrying case. 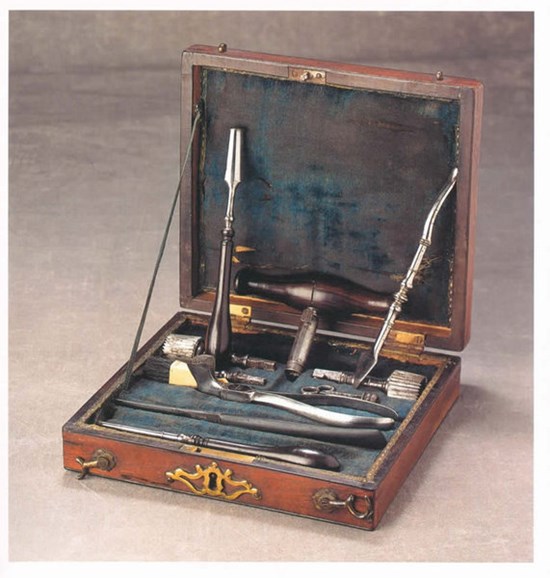 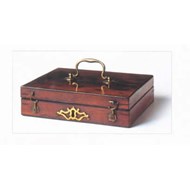