Yaqona' is the Fijian word for kava and is a type of pepper plant,
piper methysticum. The intoxicating drink is made from the roots that
are grated, chewed and pounded and then mixed with water in a bowl such
as this one and served in coconut shell cups. In pre contact times it
was used as an extremely sacred potion at all ceremonial and important
political occasions. Yaqona drinking was itself a sacred and religious
event. Today it is drunk for recreation.
The bowls are known as 'Tanoa' and were made from a valuable hardwood
called vesi which was much used for bowls, clubs and canoes.
Baron Von Hí¼gel in his Fiji journals of 1875-1877 tell of an
encounter with an enormous 'Tanoa' or Yaqona bowl; 'It is over a yard
across and it cut out of one beautiful piece of vesi. It used formally
to be kept in the spirit 'Bure' and no doubt has history . . . I
eventually offered £5 in trade or money for this Tanoa, but could
not get it'.
The turtle shape of this bowl is very rare. It has a good patina with
the remains of a rimmed kava deposit. Some of the feet are missing and
damaged but its condition is original and unrestored.
One similar but smaller sold in Christies Tribal Art Sale 6th December 1995 (Lot 9). 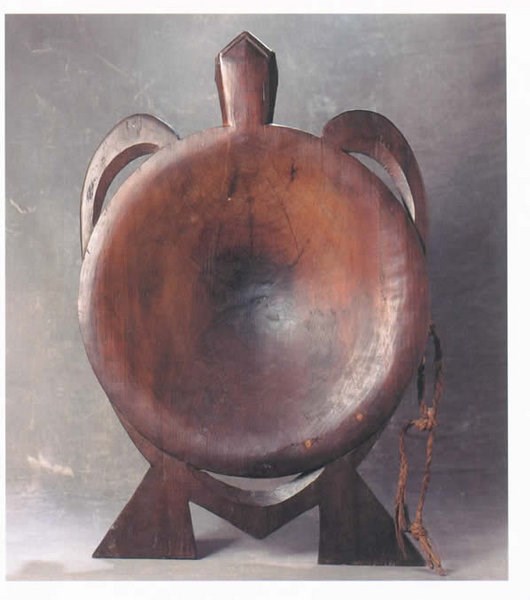