The Hon. Rev. Dawnay came from a family of Grand Tour Collectors. In
the 'Dictionary of British and Irish Travellers in Italy 1701-1800' by
John Ingamell his father is mentioned.
The sites of Rome, Pompeii and Herculaneum were 'de rigueur' for Grand
Tourists at the end of the 18th century. Large print folios were
commissioned from artists and put together depicting the wall paintings
and mosaics found at these sites and amongst other souvenirs micro
mosaics began to be made at this time copying these antique images.
There is a mosaic from the Villa of Cicero at Pompeii from the 3rd
Century BC in the National Museum of Naples showing a scene from the
Greek new comedy. The fine quality is comparable in showing the ancient
mosaicists skill in handling minute pieces of coloured stone to imitate
the effects of painting.
Much later in the 19th century as an extension of this ancient art
exquisite table tops and plaques were produced depicting the classical
sites, and were avidly sought after and collected by the crowned heads,
aristocracy, and emerging nouveau riche of Europe. There still exists
today a studio in the Vatican producing and restoring micro mosaics.
We can only imagine how much more memorable and exciting it must have
been for the Hom. Rec. Dawnay to have obtained the genuine article
whilst on his 18th Century Grand Tour. 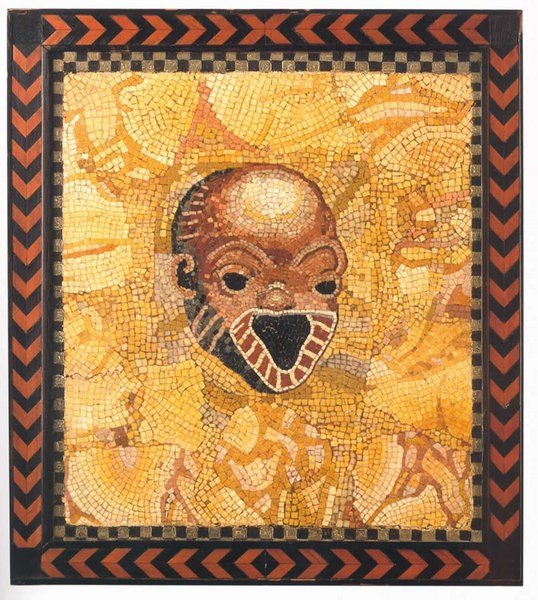