Cabinets of Curiosities were noted for their outstanding collections of
natural objects. It was said by the 17th Century Philosopher Emmanuelle
Tesauro that everything was a metaphor 'and if nature speaks to us
through these metaphors it follows that an encyclopaedic collection, as
the sum of all possible metaphors, must logically become the all
encompassing metaphor for the world'. Regarded as the wondrous horn of
the mythical unicorn, and possessed of magical powers, Narwhal tusks
were 'de riguer' for Wunderkammer. In the Royal Danish Kunstkammer
there existed 'a head of a unicorn' caught off Greenland in 1706 and
presented to Frederick IV, but this was sold at auction in 1824.
The Narwhal lives in the icy waters of the Arctic and is a close
relative of the beluga or white whale. Only the males have tusks and it
is still not known what this overgrown tooth is for, except that they
do fight and have been seen crossing their tusks with other males above
the ice. The male Narwhal grows up to 4.6m long and can weigh up to 1.6
tonnes. Migrating with the seasons they follow the ice North in the
summer and South in the winter.
It is interesting to note that the older the tusk the more deeply the
spiral twists are channelled into the ivory. This example has excellent
patination and a good deep spiral twist to the tusk. It was found
standing in an 18th Century white marble and wrought iron quayside
torchlight holder. 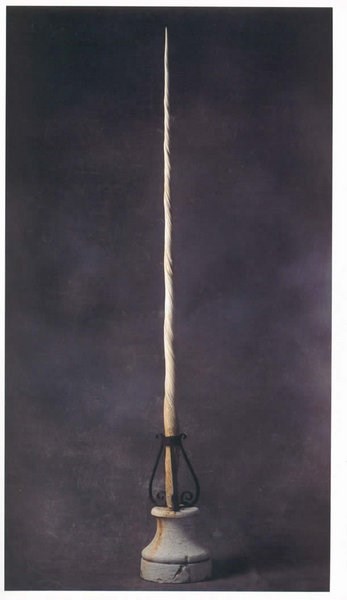