label, on ebonised wood base with silk cover. Wax, human hair and glass

From the 17th wax models were increasingly used for scientific
purposes, and at the end of the 17th century Gaetano Giulio Zumbo from
Sicily, but working in Bologna, was the first to make anatomical models
using wax. This was the start of a long artistic tradition of working
with wax to demonstrate the anatomy of humans, plants and animals.
In the mid 19th century it became idealogically fashionable to compare
the races of man. The Eugenics Society founded by Francis Galton to
improve the occurrence of desirable heritable characteristics by
controlling breeding was gaining an influence. At the height of the
Victorian self confidence when European civilization seemed to be the
peak of human achievement, and colonial enterprise appeared to be part
of a natural evolutionary process it was not difficult to believe that
strong nations prospered while the weak died out. People existing in
the 19th century with primitive cultures were seen as survivals from a
past stone age era, doomed to extinction through contact with a
superior race.
Models in wax such as this one began to be made of all the different
races of man for the scientific comparison of human characteristics.
Coloured wax was often called 'The Shadow of Life' and is remarkable in
deceiving the eye into mistaking artifice for reality and it is this
strange dreamlike quality that fascinated, and still fascinates,
collectors of curiosities. 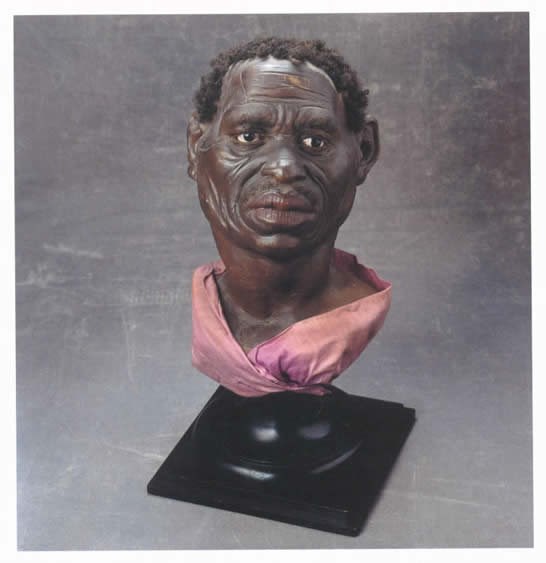