Oil on paper, laid on canvas

Franciscus Smuglevitch (sometimes spelt Smuglewicz) studied in Rome
gaining a first prize at the Academy of San Luca and in 1785 returned
to Poland to work for King Stanilas Augustus. In 1800 he went to St
Petersburg to work for the Emperor Paul.
He is known to have painted the Portrait of the dwarf Baiocco which is
labelled on the reverse 'Smuglewicz-56 a whole length of Baiocco, the
dwarf at Rome'.
Dwarves were a feature of several 16th and 17th century courts and were
often regarded in the manner of human pets. The Duke of Mantua had a
special suite of small rooms to house his group. Philip V of Spain had
his court painter Valazquez paint a magnificent series of portraits of
his favourite dwarves.
Many collectors of cabinets of curiosities had a fondness for dwarves.
They created a striking visual abrupt change of scale and provided an
added attraction to the gallery. In Manfredo Settala's 'Museum' they
acted as guides as well as being exhibits and were counted amount the
marvels of the collection. A wondrous link between the inanimate
objects and life itself. 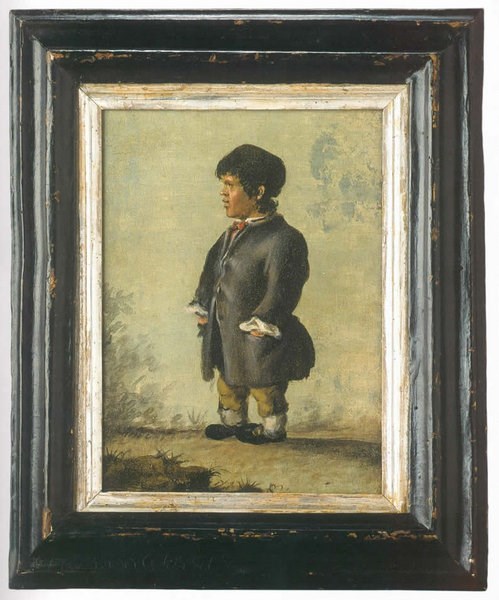