Caption Literature
A Collection of Six Rare Vanuatu, New Hebrides, Men’s Arm Bands
Shell discs, European glass beads, bark fibre
With old handwritten label reading ‘Bead – Armlet, Tongua Isd. New Hebridees’
Late 19th Century
Size: 4.5 cm high – 1¾ ins high ( min. ) 14.5 high – 5¾ ins high ( max. )
cf examples in the W.O.Oldman collection 1948. No’s AM 31586, Am31590
Vanuatu men’s grade taking ceremonies ceased around 1890 because of the disease epidemics brought by the colonists to the Islands. Chiefdoms had been founded on a hierarchy of grades and men of power would come to the fore through competition of an economic sort, but in the central and southern islands Chiefdoms were partly hereditary, partly elective and based on titles rather than achievements.
For every grade there were certain insignia and ritual ornaments such as these arm bands. This rank is obtained by passing an economic test and the higher the grade from Island to Island and from one cultural area to another. The grade taker must pay for all the rituals connected with the grade and sacrifice pigs to a value proportionate to the rank he is taking.
Taking a grade is the communities political seal of approval of successes achieved by a man of rank elsewhere in the social and economic field. He must be a ‘winner’ in whatever he undertakes and thus chiefly power is not just hereditary or elective, but is interestingly won by competition. It is these high ranking ‘fathers of tradition’ that show their grade through the wearing of these armbands. 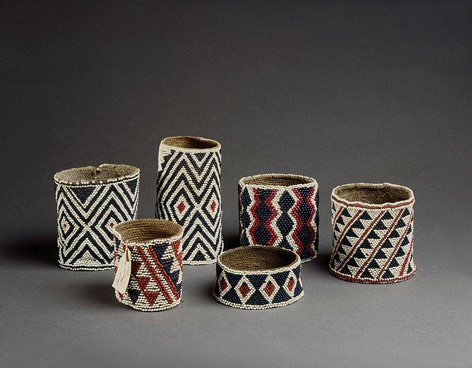