Caption Literature
A Rare Bering Sea Inuit Walrus Ivory Labret carved with a ‘Walrus Man’
and two small miniature Inuit carved walrus ivory shamans figurines
18th Century or earlier
Size: both 4 cm high – 1½ ins high and 5 cm long – 2 ins long
The animal most important to human survival in western Alaska was the walrus. Its body yielded food and materials for clothing and shelter and its tusks and bones were fashioned into tools, equipment and amulets. The hunter respected the animals formidable strength and aggression and his dependence on the walrus was visually articulated in his dress and adornment. Wearing labrets on both sides of the lower lip conveyed an image of emergent tusks, and together with the tusk like white fur gores traditionally sewn on the parka communicated the walrus-man duality.
Throughout life the slits were stretched by increasing the size of the labret which displayed information concerning sex, status and origin. This labret most probably acted as a special hunting charm or amulet which the hunter would have worn for strength and protection. In the Eskimo, all encompassing, spiritual world every object was imbued with 'Inua' or spirit and amulets were elaborately developed in relationship to the hunt.
The shaman was a key figure in western Eskimo society able to control supernatural beings and forces. He was assisted in his duties by helping spirits in the form of figural amulets that represented guardian spirits acquired during a vigil or vision quest. These figurines were made from walrus ivory and bone or wood or sometimes stone. 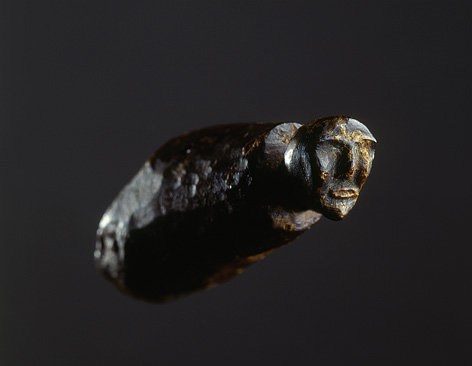 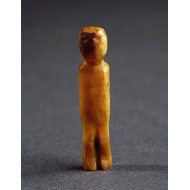 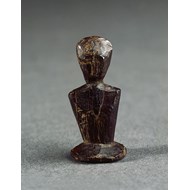