Caption Literature
A Fine Derbyshire Blue John Goblet
First half of the 19th Century
Size: 17 cm high, 9.5 cm dia. – 6¾ ins high, 3¾ ins dia.
See Finch and Co catalogue no. 8, item no. 85, for an example of a blue john tazza
Charles Leigh in his ‘Natural History of Lancashire, Cheshire and the Peak District’
( 1700 ) writes of ‘sapphirine and azure spar’ in Derbyshire, but does not mention its uses. By contrast almost every book on the Peak District from the 1760’s onwards notes both the mining and making of ornaments from ‘florspar’.
Sometimes known as ‘Derbyshire Drop’ and ‘Johnstone’, blue john does not seem to have been known by that name until a brief mention in Platt’s papers; ‘1766, Dec 2, Lady Mazarine let ye Blue John’. Two years later the name ‘Blew John’ appears in a letter from Mathew Bolton, so it would seem that it was not used for objects and ornaments until the 18th century. It was certainly an established product by 1761-2 when Robert Adam used it at Kedleston Hall in his designs for the fireplaces.
Legend has it that John Platt ( 1728-1810 ) an architect and marble worker of Rotherham was riding down Winnats Pass when his horse stumbled on a rock and looking down Platt saw a bright blue stone. He took this home and made a pair of salt cellars for his client the Earl of Fitzwilliam for whom he had designed and supervised the building of Wentworth House in 1755; and thus the fashion for blue john was begun. 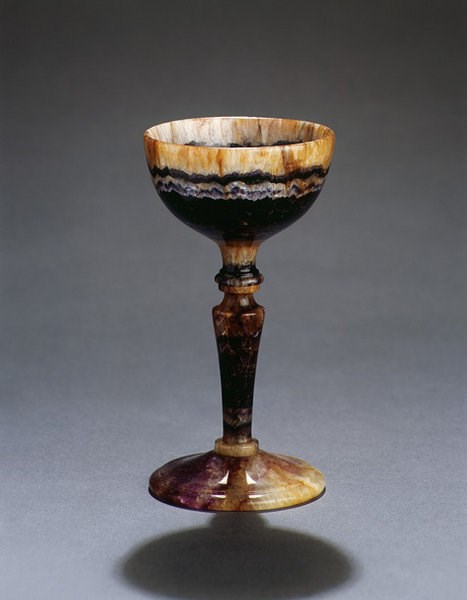