Caption Literature
A Fine New Zealand Maori Greenstone Nephrite Mere Pounamu
Early 19th Century
Size: 30.5 cm long, 9.5 cm wide – 12 ins long, 3¾ ins wide
The delicate shape of this stabbing club or ‘mere’ preserves the strength and toughness inherent in nephrite essential to its purpose as a weapon of war. When in use the club would not shatter when struck heavily while the owner was warding off a blow. The ‘Mere Pounamu’ was probably the most prized weapon of the Maori warrior, and indeed war to the Maori was a recreation, a form of sport carried out under firmly established rules using a limited range of weapons.
Preparations for war were ceremonious and these lasted for much longer than the battles themselves. Maori men spent a considerable portion of their time in grooming for battle. Their chosen weapons were only effective by reasons of considerable dexterity in their use and therefore required a high degree of physical fitness in their owners. War to the Maori was a contest of skill rather than the European approach towards domination in battle and the concept of ‘win at all costs’. 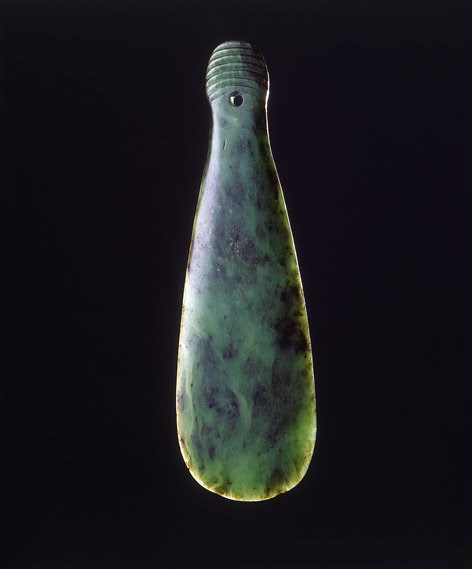