Caption Literature
A Rare Sentani, Northwest Papua New Guinea, Carved Wood Dance Staff Finial
In the form of a female figure
Early 20th Century
Size : 33.5 cm high, 6.5 cm wide, 5 cm deep – 13¼ ins high, 2½ ins wide, 2 ins deep
Lake Sentani is about 15½ miles long from west to east and is about 5½ from the north coast of Papua New Guinea. Although the region seems isolated geographically the people had established regular contact with the outside world long before the arrival of the missionary G.L Bink in 1893. He crossed the lake on a ‘Kayi’ or woman’s canoe and was probably the first white man to see the roof poles of the men’s house with their characteristically carved, elaborate wing like projections.
The Sentani had dance staffs with finials that were almost always carved as human figures and were carried by men during certain ceremonial dances. Bink noted that by the time of his first visit in 1893 the Sentani craftsmen had acquired through trade much coveted metal knife and chisel blades which were used for carving house posts, drums and human figures. Chisels also had beautifully carved human figures for handles, but they were somewhat smaller in size than those found on dance staffs.
Two very different types of dug-out canoe were used : the Ifa by the men and the Kayi by women. The men’s boat was a narrow one-man craft with a smooth hull propelled by a short undecorated paddle with oblong blade. The women’s boats had carved ornamentation applied to the platform like prow and their paddles had finely carved patterns on the blades and human figures to the tops. However these, are again smaller in size to the dance staff finials carved as human figures. 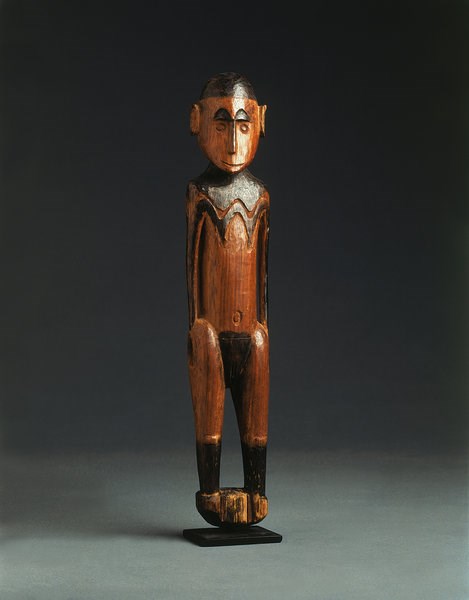