Caption Literature
A Classic Taino Caribbean Indian Stone Amuletic Figure of a ‘Zemi’
900-1200 AD
Size : 5 cm high, 4.5 cm wide, 4 cm deep – 2 ins high, 1¼ ins wide, 1½ ins deep
It is from the Classic Taino that Europeans derived their knowledge of pineapples, cassava, sweet potato and tobacco. It was they who were the first indigenous 'Americans' to have greeted Columbus and the European 'discoverers' in 1492.
The Jesuit priest Father Ramón Pané was commissioned by Columbus to study the Classic Taino's religion which centred on the worship of deities known as 'Zemis'. Small zemi were worn by Taino warriors on their foreheads and animal and human amulets were also worn on the body. This figure probably represents the male deity known as 'Baibrama' whose assistance was sought in the growing of the Cassava crop and in curing persons poisoned by its juice. Baibrama is always depicted in a standing or squatting position with an erect penis, which this carving no longer has, as if urinating to increase the growth of crops.
The classic Tainos had a sophisticated form of agriculture. Instead of simply slashing and burning the forest to make a temporary clearing as in common in the tropics they heaped up mounds of earth in more permanent fields to cultivate crops in the soft alluvial soil. Cassava was the principal root crop and could be grown over a period of ten to twelve months and kept in the ground for up to 3 years. The men used digging sticks to plant cassava cuttings. The women grated its starchy roots and squeezed out its poisonous juice in a basketry tube to obtain flour from which they baked bread which could also be preserved for long periods of time. 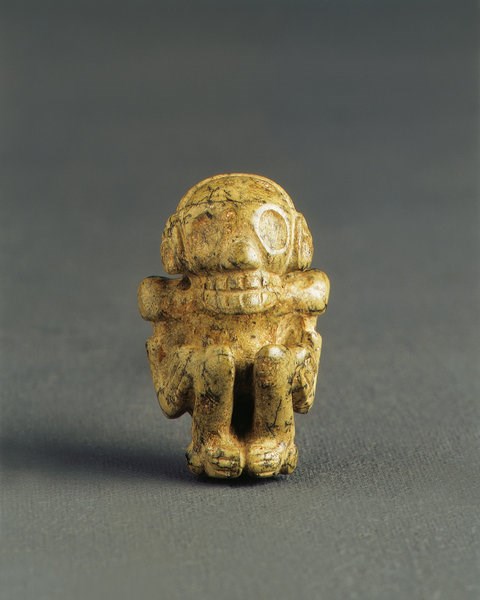