A Fine and Rare German Carved Serpentine Model of an Elephant

Caption Literature
A Fine and Rare German Carved Serpentine Model of an Elephant
Second half of the 17th Century
Size : 11.5 cm high, 6.5 cm wide, 12 cm deep – 4½ ins high, 2½ ins wide, 4¾ deep
See Finch and Co catalogue no. 7, item no. 83, for another example of a 17th century elephant.
The elephant has been used for the last 2000 years to represent military victory since the Romans became acquainted with them during the Punic wars.
The first war elephants were Indian and although not used by Alexander the Great they were frequently used by his successors particularly the Seleucids and Ptolemies. When the Seleucids gained control of the Indian sources of supply, the Ptolemies began to capture and train African ‘forest’ elephants then found in the hinterland of the Red Sea. Smaller than Indian elephants they should not be confused with African ‘bush’ elephants which are much larger and were unknown to the ancients. The forest elephant is now almost extinct and was until recently found in Gambia.
The Carthaginian’s used African elephants drawn from the forests of the Atlas region against the Romans. These elephants can clearly be seen on Carthaginian coins minted in Spain. Hannibal famously took elephants across the alps in 218 BC and they helped him win his first victory at the Trebbia, but all save one died in the winter of 218/17 BC. This surviving elephant carried Hannibal through the marshes of the Arno in 217 BC and may be the one called Surus mentioned by Cato the Elder.
Until their downfall the Seleucids continued to make use of elephants, but although the Romans also sometimes used them in war they were mainly kept for the arena or for ceremonial occasions. During the Roman Empire an Imperial herd was kept in Latium.
Curiously the Romans never used elephants as pack animals or for road building as they were by the British in the colonial empire, as late as the 2nd world war.

A Fine and Rare German Carved Serpentine Model of an Elephant 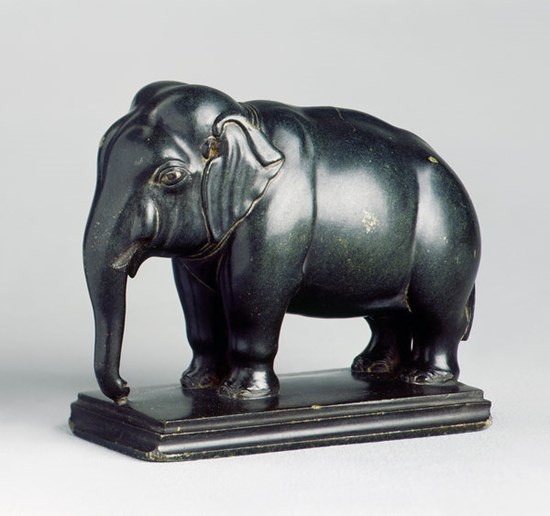