Caption Literature
A Fine Fijian ‘Gata’ Club
Old smooth silky patina
18th / 19th Century
Size : 98 cm long – 38½ ins long
See Finch and Co catalogue no. 2, item no. 16, for a comparable example
These clubs are called 'Gata' as their shape represents the gaping jaws of a striking Pacific Boa snake. The small holes in the blade were originally strung with wiry black walao creepers. A variety of heavy hard woods were used for the making of war clubs, each of which was carved from a single piece with a stone adze or 'matau'.
New types of club did not evolve on Fiji during the 19th century. The 'gunstock clubs' were not in fact imitations of European muskets, but indigenous designs made on the Island and passed down through the generations for at least 200 or 300 years before the appearance of the European explorers and traders. Thus the 'Gata' club was made in the late 18th and early 19th century to a pattern evolved by ancestors during centuries of war. 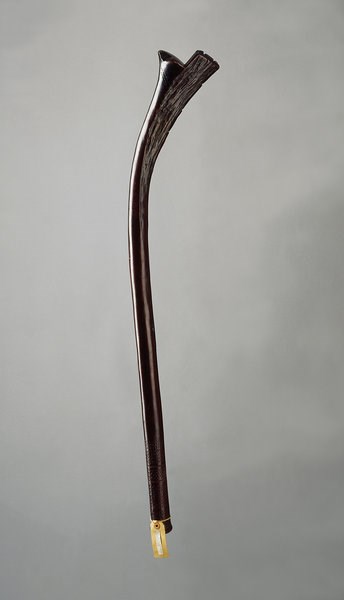