Caption Literature
A Collection of Six Large Baltic Amber Specimens
One with traces of encrusted sea barnacles
Approx : 100 million years old
Size : 12 cm high, 9 cm wide – 4¾ ins high, 3½ ins wide ( max )
Amber is the petrified plant sap of prehistoric pine trees. These fossil resins were known in Germany as ‘Bernstein’ or burning stones due to their flammability and amber is classified as a ‘Caustobiolite’ together with coal and oil shale.
Amber is found on all continents except Antarctica and there are nearly 100 known amber deposits throughout the world. The largest deposits of amber, and the ones exploited the longest, come from the shores of the Baltic Sea. Amber also washes up on the shores of eastern England and Scotland especially after storms, and has been harvested and highly prized by man for at least ten millennia.
The oldest amber artefacts in the world have been found in England. Rough beads from Gough’s cave in Cheddar, Somerset, that date from 11’000 to 9’000 BC. 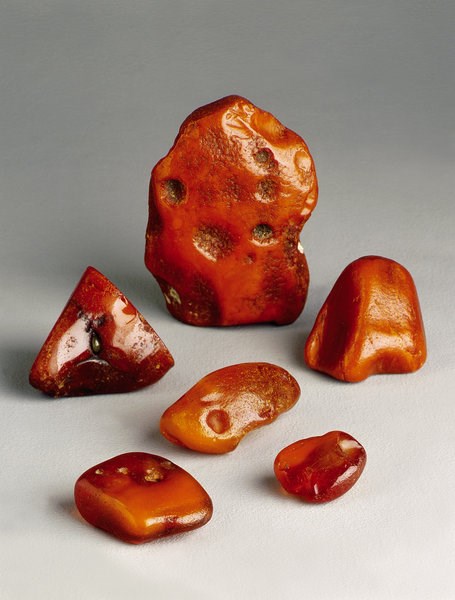