Caption Literature
A Rare Fine Archaic Etruscan Votive Bronze Kouros
520 – 450 BC
Size : 11 cm high – 4¼ ins high
In the 19th century Kouroi were thought to be representations of Apollo who was venerated by the Etruscans, as was Hercules, for assisting mortals in their eternal struggle against the hostile forces of the cosmos. To the Etruscans there was not simply one God, stern and relentless, but many, scores of them, together with their consorts, sons and daughters, and a variety of demi-Gods like the nymphs and dryads who dwelt in trees, fountains and waterfalls. All of these were constantly involved in every human activity and always present either on earth or in their celestial habitations from which they could observe the goings-on of earth below, and all had to be served and appeased with sacred offerings and acts of sacrifice.
This finely detailed Kouros holds a phiale in his left hand whilst his right is raised in supplication to the Gods. The bronze loop attached to his head indicates that he was once hung from the branch of a tree, or nailed to a post, as a votive offering at a sacred site. 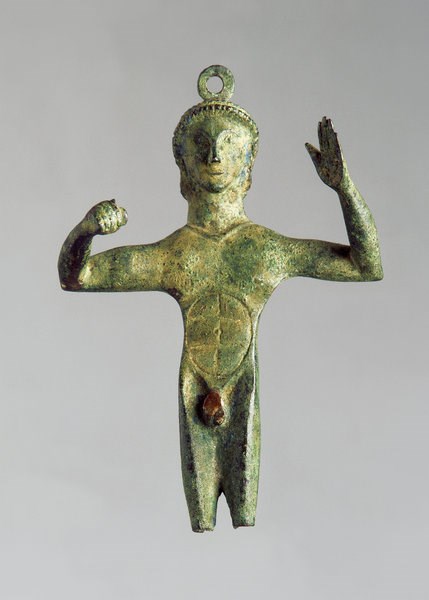