Caption Literature
A Rare Andaman Islands Aboriginal Bow, with old label ‘double curved bow made by
the Natives of Andaman Island. By Dr. Brander. Bengal Medical Corps 1868’
19th Century
Size : 187 cm long, 6.5 cm wide – 73½ ins long, 2½ ins wide
This particular type of single stave paddle shaped bow is found in the Southern Andaman Islands and is made by the nomadic hunting and gathering Jarawas people. They are now on the verge of extinction, and are described by the Indian government as a 'heritage tribe'. They are reclusive and hostile to the outside world living in 639 square kilometres on the south and middle Andaman Islands.
The first western visitor to the Andaman's was Marco Polo who called the Islands 'the land of the head hunters'. The British first annexed the Nicobar Islands in 1869 and then the Andaman Islands in 1872 to form one single administrative unit. Decimated by disease from the colonisers the indigenous Negrito communities retreated further into the forest, but by 1950 it was estimated they numbered less than 700 persons.
The origins of the endangered Andaman tribes still mystify anthropologists. Genetic evidence suggest that pygmy like people with dark skin and tightly curled hair have lived on the Andaman's for at least 60'000 years. They are a very important living link to our pre-historic hunter, gatherer forefathers.
Recently it was found that the isolated Jarawas people were relatively unharmed by the Tsunami. Their age old, early warning system for predicting earth quakes and sea surges proved more reliable than any other form of advanced 21st century seismic technology. It consisted of simply noticing the changes in the behaviour of the birds in the forests and in the marine life of the coasts, and then taking to the high grounds for safety. 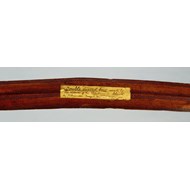