Caption Literature
A Native American Great Lakes Area Man’s Headdress, Dentalia shell and Venetian
variegated glass trade beads
And a woman’s necklace of blue glass and brass beads and shells. With old labels inscribed ‘Indian Headdress’ and ‘Indian Squaws Bracelet’.
Circa 1850-60
Size : 91.5 cm long – 36 ins long and 38 cm long, 5 cm wide – 15 ins long, 2 ins wide
Dentalia shell were valued not only for their ornamental qualities but also as a principal currency unit. They were distributed both by the white traders who named the shells ‘Iroquois beads’ and through inter-tribal trade from the Pacific to the Artic. Edwin Thompson Denig wrote of this trade in the 1850’s among the Asiniboin on the Upper Missouri : ‘this shell is sought after by them more eagerly than anything else of the kind. They are procured on the coast of the Pacific and find their way to our tribes across the mountains through the different nations by traffic with each other until the Crow’s and Blackfeet get them from some bands of the Snake and Flathead Indians with whom they are at peace’.
The wearing of jewellery was a demonstration of wealth and status both conspicuous and implied, but jewellery was also made and worn as ceremonial regalia and held spiritual meaning and power.
Using glass beads to win Indian friendship was a prevalent custom in the time when England, France, Sweden, Holland and Spain all vied for control of North American territories. The practice lasted through the American revolution when gift giving gradually gave way to trading beads for fur, and through the fur trade, glass beads had a significant effect on Native American Indian life. 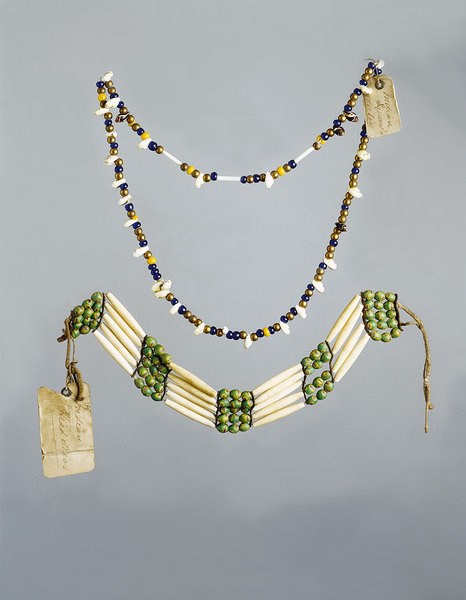