Caption Literature
A Superb Rare Ancient Andean ceremonial Sculpted Stone Snuff Mortar in the form
of a Feline head
1000 – 500 BC
Size : 20 cm high, 19 cm wide, 16.5 cm deep – 8 ins high, 7½ ins wide, 6½ ins deep
The best known of the early Peruvian civilizations is Chaví­n. Its name is taken from Chavin de Huantar, an archaeological site in the northern highlands of Puru which is notable for its monumental architecture, finely carved stone sculpture and elaborate iconography.
Elaborately sculpted stone mortars have been found in Chavin de Huantar and at other nearby sites and many have feline faces. In Chavin cosmology the feline Jaguar played an important role. The Jaguar is the largest, most powerful, swiftest, and most ferocious carnivore in the American tropics. It is both a threat and a competitor to hunters in the rain forest. Its thunderous roar and its nocturnal stalking along rivers add to its potential as a sacred symbol with several layers of meaning.
The religious leaders of the Chavin believed the Jaguar to be their natural alter ego and they claimed they could transform themselves into Jaguars in order to communicate with the celestial forces and mediate with the Gods on behalf of man.
Hallucinogenic snuffs and beverages apparently catalyzed these changes in Priests and their consumption of them was an integral part of the rituals of the Old Temple at Chavin de Huantar. The role of hallucinogenic snuffs in shamanistic transformation is clearly expressed in these ceremonial mortars with their gaping round eyes and anthropomorphic faces.
The quality of the carving and polishing of this stone feline head, and the small size of the depression in the mortar, rules out its use for grinding grain. It would have been ideal for preparing psychotropic snuff from vilca seeds or epena that was traded up to Chavin de Huantar from the tropical rainforests. 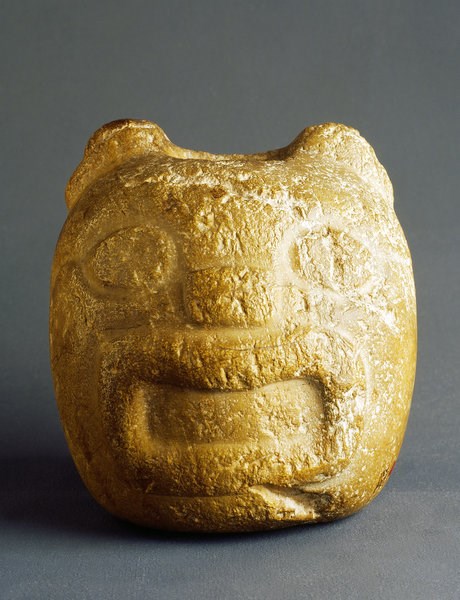 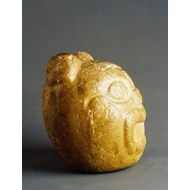 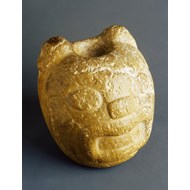