Caption Literature
An English Watercolour on Paper Depicting a South African Scene
Entitled ‘Bakers River Algoa Bay 1806’ the officer’s trumpet sounding the words: ‘Helm’s a Zuâ€¦.’ Probably from an album
Early 19th Century
Size : 13 cm high, 16.5 cm wide – 5 ins high, 6½ ins wide
This early 19th century depiction of the military station at Algoa Bay in the Eastern Cape is most probably a political satire on French naval plans for control of the trading routes around the Cape and of their help to the Dutch settlers in the area.
The Eastern Cape and the area around Algoa Bay was first colonised by the Dutch in 1652. The British arrived in 1795 and realising the advantages of Algoa Bay as a landing place for the defence of the area set up a blockhouse and a fort. As is shown in the watercolour it consists of a wooden blockhouse built in sections and surrounded by a massive square stone redoubt. It was named Fort Frederick in honour of the Duke of York, commander in chief of the British Army and it is said that this was the first piece of ‘substantial and permanent building ever erected in the Eastern Province’. It is still in existence today commanding a view of the whole of Algoa Bay, set next to the ‘Baakens River’ as it is now known.
In 1803 the Batavian Government took over the Cape from the British, but by 1806 they were in serious decline, and with Britain’s line of communication with the Far East threatened by the ambitious plans of the French Napoleonic regime, the British re-occupied the Cape. Thus, in 1806 Fredericks Fort witnessed a great deal of naval action in Algoa Bay. 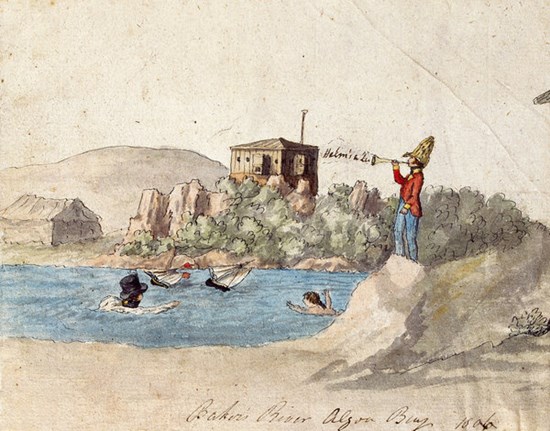