Caption Literature
An ancient Chancay culture, South American, two handled pot decorated with Ibis
Cirac 1200-1500 AD
Size : 23 cm high 18 cm wide
9 ins high 7 ins wide
On the central coast of Peru the Chancay culture followed that of the Tia Huanaco culture. Their pottery was sometimes cruder in the modelling of the clay but it has an appealing naive quality. The painting of the ibis birds in black and white slip is accentuated by the raised deatils in the pottery of their feet and eyes.
Before the Incas, various distinct artistic styles had developed contemporaneously within the narrow confines of the geographically isolated valleys and plateaus of what is now Peru, Ecuador and Northern Brazil. However, in the last centuries before the Spanish conquest, the Incas built a wide flung network of roads stretching across vast areas which far surpassed the European Roman road network in both length and excellence and united the entire area into a culltural, political and military entity. 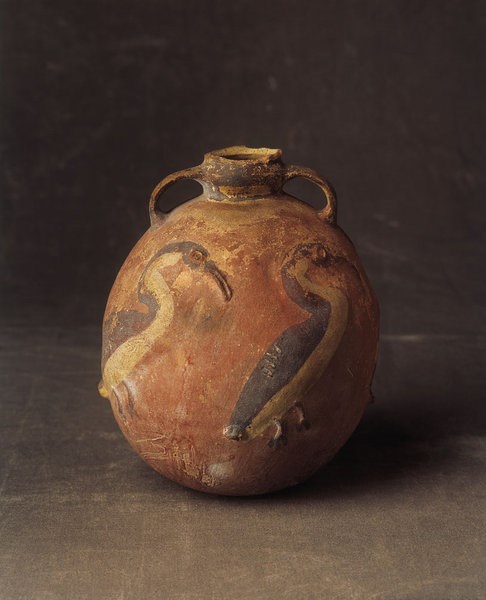