Caption Literature
A Fine New Zealand Maori black tag mantle 'E Koroai', the borders profusely trimmed with kiwi and red 'kaka' feathers
Sold with an early 20th century photograph 'maori cooking operations'
Early 19th century
Size : 107 cm x 134.5 cm
42 ins x 53 ins
GF Angas visited New Zealand in the 1840's and his book published in 1847 (savage Life and Scenes in Australian and new Zealand) contains the extract: 'the mat most generally worn is the black string mat called 'E Koroai'. A flax dress thickly ornamented with black strings or filaments of twisted flax about a foot long, which are dyed by means of 'hinau' and have a remarkably graceful appearance over the folds of drapery. Another kind called 'E Tatara' has fewer black strings and is adorned with tufts or bosses of scarlet and other coloured wool with frequently a border of the same material. formerly the natives used the red feathers of the 'Kaka' ( Nestor Meridionalis), a species of parrot, and also other birds inhabiting the forest to decorate these mats; but wool of the gayest colours has long been prefered by them. Blue and scarlet caps, and the variegated 'comforters' brought by the traders find a ready market amoungst the women, who pick them to pieces to form tufted ornaments for their dresses'.
It is possible therefore that this example predates the 1840's and as it also has a kiwi feather and parrot breast red feather border, that it was worn by a person of Maori rank and importance.
According to Major RA Cruise writing in his (Journal of Ten Months residence in New Zealand, 1827), a mat ornamented with Kiwi feathers 'is the most costly dress a Chief can wear'. 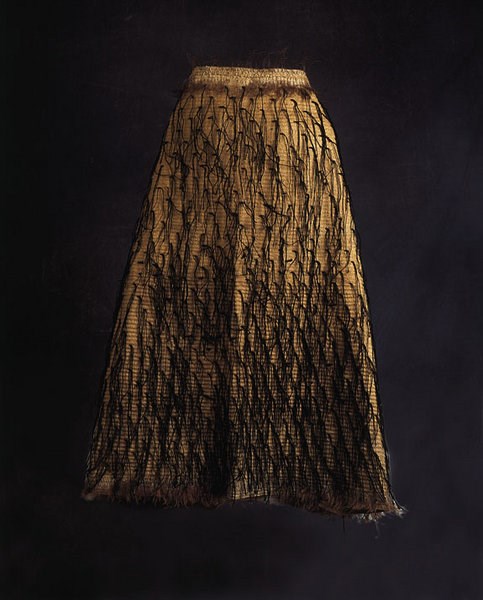 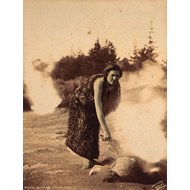