Caption Literature
A Rare ironwood Tongan Paddle Club 'Moungalauau' decorated with a large human geometric figure, ideographs of turtles and birds, and zig-zag motifs ( sides reduced )
Early 19th Century
Size : 108 cm long
42½ ins long
This paddle club with its rounded upper end is distinguished by the finely carved decoration over its entire surface achieved by using a sharks tooth lashed with plaited sinnet to a wooden handle. The shape is probably meant to represent a crocdile head rather than a paddle.
The primary use of the Tongan club was to kill people and sometimes to kill pigs. However, it would also be used for ceremonial purposes and even for dancing. At a reception held for Captain Cook, he was entertained with a display of club-fighting
Travelling on Cook's second voyage in 1774 J.R Forster, a natural scientist, stated of Tongan culture: 'their utensils, manufactures, agriculture and music bespeak their inventive genius and elegant style'.
( Forster 1778:235 ) 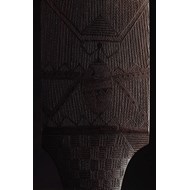