Caption Literature
A Rare New Caledonian Hardwood War Club with a notched mushroom shaped head and indigenous , distinctive , expanded flange at the butt .
Late 18 th – Early 19 th Century
Size : 72.5 cm long , 11.5 cm dia. ( head ) – 28½ ins long , 4½ ins dia. ( head )
In 1774 this Island so reminded Captain Cook of Scotland that he named it New Caledonia . It is a strange and curious land having broken away from the western tip of prehistoric Australia . It is outstandingly rich in unique species and it's natural fauna is still ruled by reptiles , the sole resident mammal before the arrival of man being the fruit bat or flying fox . It's trees are prehistoric remnants of what once existed 80 million years ago .
Most of the objects Cook brought back from New Caledonia that exist in the voyage collections were clubs . All New Caledonian war clubs have a high natural polish and this varnish like sheen was achieved using shells and quartz fragments to rub down the grain of the wood , then smoothed with a plant rich in silicic acid . Later 19 th and early 20 th century clubs have a cruder and more easily made finish achieved with glass shards rather than with shells . 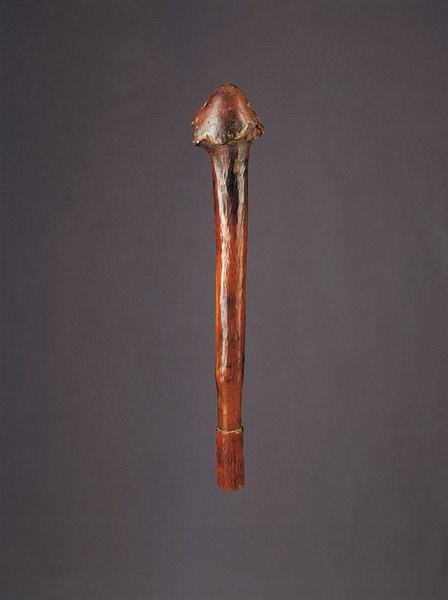