Caption Literature
A Victorian Petrified Birds Nest with its eggs
19 th Century
Size : 17 cm x 16.5 cm dia. , 11 cm high – 6¾ ins x 6½ ins dia. , 4¼ ins high
Of great curiosity to the Victorians the petrifying wells of Matlock Bath in Derbyshire created petrified souvenirs for the aristocratic tourist trade . In 1832 the Princess Victoria visited Mr Joseph Pearson's 'Great Petrifying Well' where the water filtering through a mass of tufa drops from the roof and sides and losing a part of its carbonic gas forms earthy particles upon the substances on which it falls . The objects were placed under the drops which then produced a calcareous deposit which in time assumed the hardness of stone .
'The Royal Petrifying Well'as it became known after the Princess's visit was the bigger of the three ; Mr Smedley's being under his spar shops and Mrs Boden's situated near the post office . All three of these wells were filled with a profusion of articles put in to be petrified : stags heads , wigs , baskets of flowers , birds nests etc. all of which had to be turned every few weeks to prevent them from growing to the bottom . 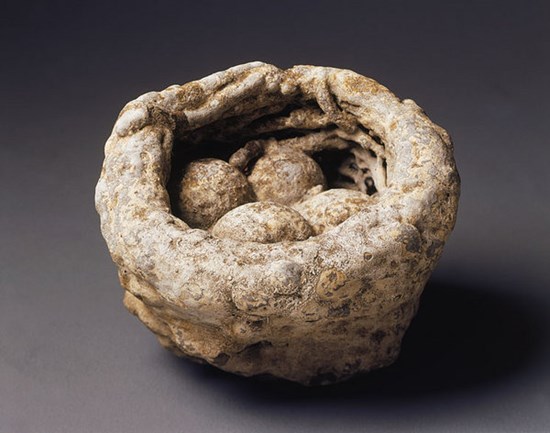