Caption Literature
An unusual and impressive pair of Chinese Rootwood Dogs of Fo or Lion dogs 'Shih Tzu Kou'
The eyes overlaid with black lacquer
18th century
Size: 41 cm h x 46 cm w x 18 cm d
16 ins h x 18 ins w x 7 ins d
The dogs of Fo or Lion dog is a mythical Chinese hybrid lion/guard dog that resembles the more familiar pekinese and is often depicted carved in wood or stone as a guardian to the entrance of Buddhist temples and shrines.
The Chinese word for lion 'shizi' is probably devired from the Persian 'Sir' and it was only through contact with the West, probably during the Han dynasty, that China became acquainted with lions. Hunted by the Assyrian Kings, thay were symbols of power and strength. During the Tang period ambassadors sent gifts of lions from Persia and India which were kept in Imperial zoos.
Dogs were amongst the earliest domesticated animals of neolithic China. They were probably bred from the 5th or 4th millennium BC as guard and hunting animals and they supplied humans with fur and meat. The dog first appears in Chinese art as the impetuous hound of the chase, then as the ferociuos dog of war and lastly as the fearless guardian of the palace and the temple. The Han hunting dogs were of two species the fleet, slim greyhound used for hunting deer and the stockier-built mastiff, brought to China by the ancient Turks. This dog was pwerfully built, carried its tail curled on its back and had similarities to the pekinese and chow dogs of today.
Since the lion was not a frequent sight in China the Chinese artist did not understand the anatomy of the animal and consequently they were depicted as resembling dogs. Thus dogs of Fo became temple guardians synonomous with the Buddhist guardian lion. 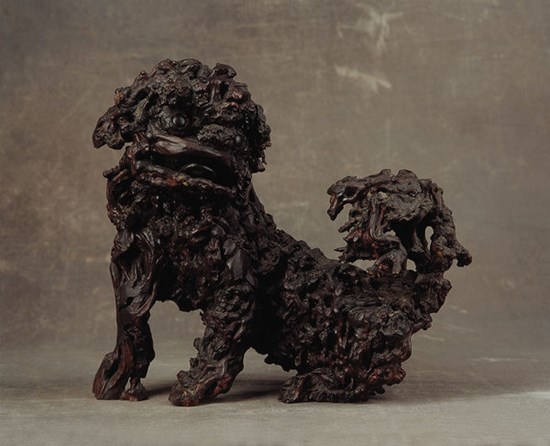 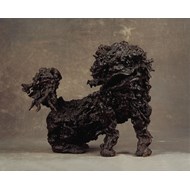