Caption Literature
An Unusual Maori Kauri Gum Portrait Plaque
Depicting the head of a Chief with Maori ‘Moko’ or Tattoo
Circa 1880
An old label on the reverse inscribed ‘History of the Maori head carving. Head of a genealogical staff ( Twakapupa ). These were used as an aid to memory when reciting genealogical tables. Each notch shown in the carving represents an ancestor. Presented to my late father by Sir Julius Vogel 1888’
Size : 13 cm high, 10 cm wide, 4.5 cm deep – 5 ins high, 4 ins wide, 1¾ ins deep
( one edge with old restoration )
Sir Julius Vogel ( 1835 - 1899 ) was a New Zealand statesman, journalist and businessman. Born in London, he studied metallurgy at the Royal School of Mines and emigrated to Australia in 1852 attracted by the prospect of the gold discoveries in Victoria. In 1861 he moved to Otago and became the founding editor of the Otago Daily Times. In 1863 he became an MP and within ten years he had become Prime Minister.
This plaque is made from the gum of the Kauri tree, Agathis Australias. The resin bleeds from wounds on the tree created when a branch is damaged or broken. Known as 'Maori amber' these lumps of hardened resin would fall from the tree as it shed its bark and would become buried under hundreds of years of forest litter where they would develop their colour. It was extensively dug by both the indigenous Maori who used it for carving and the European settlers who used it in the production of a high quality varnish. The gum is now very rare and the Kauri tree is protected.
Busts of Maori Chiefs and dignitaries made of the same gum or resin were made later on in the early 20th century as souvenirs and are somewhat cruder and less powerfully modelled than this portrait plaque. 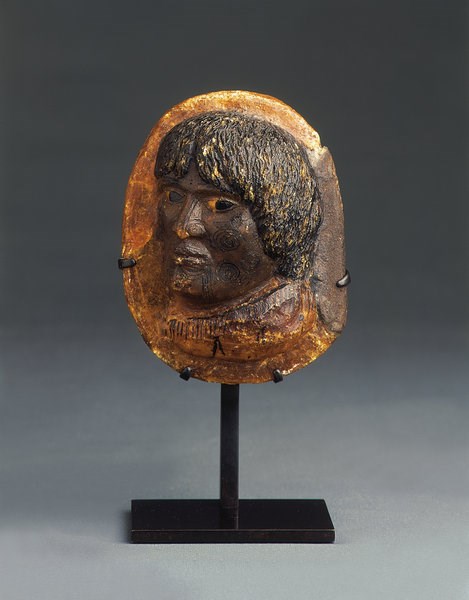 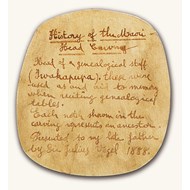