The peoples of Luristan known as Kassites were described by Greek historians as those 'belligerent barbarian tribes renowned for their warlike valour'. Alexander the Great had to fight them and in 317 B.C Antigonus, ( known as 'Cyclops', Alexanders one eyed General ), wishing to besiege Susa entered the lands of the Kassites without agreeing to pay them the customary tribute reported that his troops 'harassed by these savage mountaineers' suffered terribly.
Around 1500 B.C they were a thriving people of peasants, nomadic stock raisers, horse breeders and warriors who according to Strabo could 'put at the disposal of the Elamites on occasion as many as 13000 archers to help them fight the Susians and Babylonians'.
Numerous objects in bronze, gold, iron and silver have been found in their tombs near the springs by which they camped in the high plains of Luristan, many of which are decorated with scenes often borrowed from Assyrian mythology. As nomadic warriors and hunters, the Kassites of Luristan believed these objects to be protective spirits. 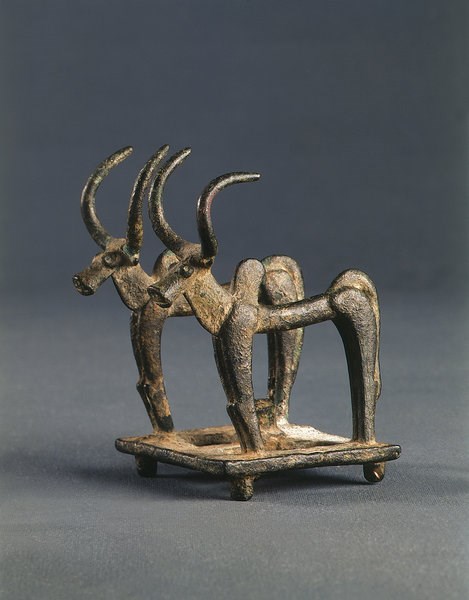