Caption Literature
A Rare and unusual decorated Ceremonial Mask from the Burmese hill tribe of the Chin .
Wild Gayal Ox Bone , Dogs teeth , Wooden beads and fibre
19 th - Early 20 th Century
Size : 21 cm high , 25.5 cm wide , 13 cm deep – 8¼ ins high , 10 ins wide , 5¼ ins deep
The Kuki peoples live southwest of the Naga and are comprised of the Chin and Lushai tribes . They are related to the Kachin of the Naga hill areas , but they claim to be the elder branch of the Burmese family of hill tribes .
This mask was identified by the Natural History Museum in London as being made from the pelvis of a now endangered species of wild Ox called the Gayal which is a near relative to the Mithan Ox revered by the Naga . Once found extensively across south eastern Asia and India the Gayal is now restricted to a small range in the forested hills of northern Burma .
The Gayal was a sacrificial animal to the Chin and was a powerful symbol of their belief in fertility . They believe well being is achieved by humans being 'in control' of the natural process of fertility ; misfortune is the result of being 'out of control' . Accidental deaths such as being killed by a wild beast or falling from a tree are a ritual and social calamity , the result of being 'out of control' . The mask was worn during ceremonies to attain or regain 'control' of the fertility process . 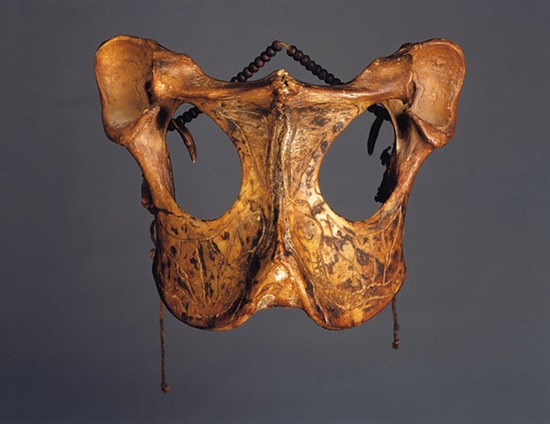