Handwritten label to base: The Jungle, Rowland Ward 167 Piccadilly, London. With printed trademark.

The Emperor Rudolf II of Habsburg (1552-1612) built a large cabinet of curiosities in Prague. He had almost limitless resources to pursue his insatiable desire for new acquisitions of the rare, unusual and bizarre. One of his prized possessions was a painting of 'A Nile Horse' which is actually a hippopotamus.
The size of the skull of this specimen leads one to believe that it dates from an earlier period than the 19th century. The handwritten Rowland Ward label pasted to the underside of the wood stand dates from the early 1870's, but Rowland Ward was often commissioned to remount and restore particularly good older specimens that resided in aristocratic country collections.
There is another hippo skull in the Royal Danish Kunstkammer, 1737, that is recorded as entering the collection in 1689 and measured 63cm. This specimen measures 87cm and thus is possibly 17th century, certainly it must date from the 18th century.
The large curling malformed tusk indented the skull as it grew upwards and is perhaps the reason why this massive skull was originally preserved. 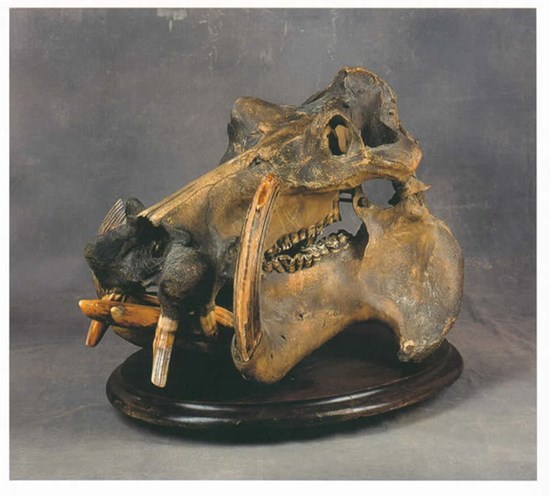 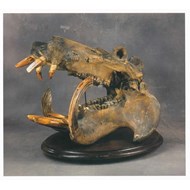